The president first came up with the idea of pursuing a Korean-version of the "New Deal" project during a government meeting on April 22. It was pursued as part of the government's efforts to overcome the COVID-19 crisis at an early date and prepare for the post-coronavirus era to be led by the fourth industrial revolution. But details of the draft plan had not yet been released.

Addressing a Cheong Wa Dae ceremony to declare a concrete vision and masterplan for the project, Moon said it represents the government's strong will to fundamentally change South Korea from a "follower economy" to a "pacesetting" one, a carbon-reliant economy to a "low-carbon" one and from an "unequal society" to an "inclusive" one.

"The government promises an unprecedented (scale of) investment in the Korean version of the New Deal," Moon said. "It will directly invest 114 trillion won of state funds (into the project) by 2025," he said, adding that the total investment will hit 160 trillion won when spending by the private sector and local governments are included.

He predicted that 1.9 million jobs will be created by the year under the project. 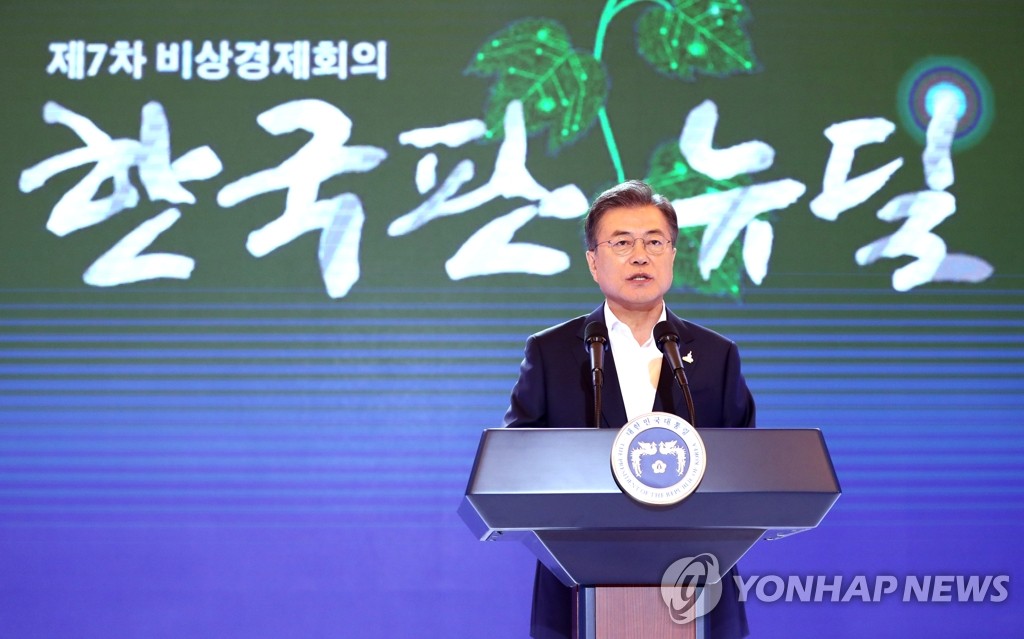 By 2022, when the president's five-year term finishes, his government plans to spend 49 trillion won to create 890,000 jobs. Moon vowed "tangible changes" by the deadline.

"I hope the Korean-version New Deal will be a new opportunity for those who need jobs," he said.

Moon said the Korean New Deal should continue to evolve, going forward, even under the next administration.

"The Korean version of the New Deal, announced today, is the beginning of the grand transformation of the Republic of Korea," he said, using the nation's official name. "It's a a starting point for a leap forward to a country to lead the world."