In its white paper, entitled "the Next Hyper-Connected Experience for All," Samsung estimated that the completion of the 6G standard could happen as early as 2028 and mass commercialization of the system two years later.

"While 5G commercialization is still in its initial stage, it's never too early to start preparing for 6G because it typically takes around 10 years from the start of research to commercialization of a new generation of communications technology," said Choi Sunghyun, who heads the Advanced Communications Research Center at Samsung Research, the research & development hub of the company's set business. 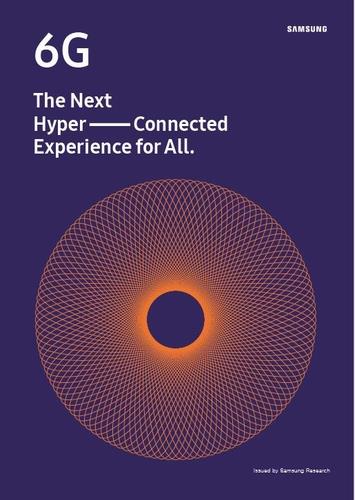 South Korea became the first country in the world to commercialize the 5G network in April 2019.

Samsung, a major network equipment manufacturer, said it is striving to develop 6G technologies with experience and know-how that it accumulated from handling multiple communications networks.

The company founded the Advanced Communications Research Center in May 2019 to study the next-generation communications system.

"Both humans and machines will be the main users of 6G," the company said. "6G will be characterized by provision of advanced services such as truly immersive extended reality (XR), high-fidelity mobile hologram and digital replica."

In order to start 6G services, Samsung said three categories of requirements -- performance, architectural and trustworthiness -- should be met.

The world's largest memory chip and smartphone vendor said that 6G will need to deliver a peak data rate of 1,000 gigabits per second and air latency less than 100 microseconds, which are 50 times the peak data rate and one-tenth the latency of 5G.

Resolving issues of limited computation capability of mobile devices, implementation of artificial intelligence (AI) solutions were cited as architectural requirements by Samsung. Security and privacy were also issues that needed be addressed for 6G commercialization, it added.

Samsung also mentioned technologies that could be essential to realize 6G, such as the use of the terahertz (THz) frequency band, advanced duplex technologies, spectrum sharing to increase the efficiency of frequency utilization and the use of AI in wireless communications.