SEOUL, July 14 (Yonhap) -- South Korea is considering requesting the United States to have its service members and related individuals go through coronavirus testing before their departure for the South amid growing concerns over a surge in imported cases, officials said Tuesday.

This month alone, the U.S. Forces Korea (USFK) reported a total of 38 COVID-19 patients, including 11 cases on Monday, all of whom tested positive upon arrival or during their mandatory two-week quarantine period after arrival.

"Residents in Pyeongtaek are anxious about the recent uptrend, and some call for a measure that requires USFK-affiliated people to undergo a virus test before leaving their home country," an official said. Pyeongtaek is where USFK headquarters are located.

"So the city government asked the Gyeonggi government and the Korea Centers for Disease Control and Prevention (KCDC) to make such a recommendation to the U.S. side, if not making it obligatory," he added.

Until Monday, the city reported a total of 97 COVID-19 patients, and 60 of them are USFK-related individuals. Across the nation, the total COVID-19 caseload among USFK members stood at 74.

USFK has implemented aggressive measures to stop the spread of the virus, but there has been a growing call for tougher entry procedures for newly assigned service members, another official said.

Currently, foreign arrivals from four high-risk countries -- Bangladesh, Pakistan, Kazakhstan, and Kyrgyzstan -- are required to submit health certificates proving they have tested negative for COVID-19. Health authorities said more could be subject to the requirement according to the virus trend down the road.

"Now is USFK's troop rotation season and the South Korean and the U.S. authorities are working closely on the virus issue," another government official said.

In order to relieve anxiety among citizens, the government will also cooperate further with the U.S. military to promote its stringent preventive measures, he added.

"The last organic USFK positive case that originated from on-peninsula was mid-April," USFK spokesperson Col. Lee Peters said. "The majority of our recently confirmed cases have been asymptomatic and we are catching them on their first test and they are immediately going into isolation after spending only 1-2 days in quarantine."

The official did not elaborate on further steps to reduce the number of patients among newly assigned members, while noting that the South Korean authorities "are extremely satisfied with our aggressive approach to identifying, containing and preventing the spread of COVID-19." 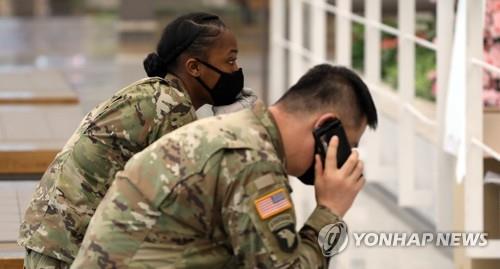