SEOUL, July 14 (Yonhap) -- One in two young South Koreans quits their first job after less than one year in search of better-paying and more stable employment, a report showed Tuesday.

The report published by the Korean Labor Economic Association also found only one in 10 young people work for more than four years at their first jobs. It said 50.2 percent of young employed people leave their first jobs before a year is up. 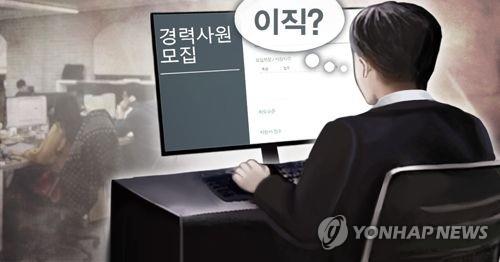 Only 12.2 percent retain their first jobs for more than four years, it added.

"A large number of young workers are dissatisfied with their jobs and move to another employer in search of higher wages and jobs with guaranteed employment until retirement age. It may be an exploratory process, but frequent job changes can make labor proficiency difficult and negatively affect working conditions," Hwang Kwang-hun, a researcher of the association, said.

Hwang said he compiled the report after analyzing surveys of young employed people conducted from 2007 to 2018.

He noted the incidence of separation from the first employment was higher among young men who take their first jobs later than others. The separation ratio was also higher than average in case of a mismatch between college majors and jobs and among license holders, he added.

Half of young people quit first jobs in less than one year: report

Half of young people quit first jobs in less than one year: report