In his televised briefing on the carmaker's EV road map to President Moon Jae-in, Hyundai Motor Group Executive Vice Chairman Chung Euisun said the group is targeting to sell 1 million EVs in 2025 to expand its presence in the global EV realm.

"The year 2021 will be the first year of Hyundai Motor Group's leapfrog to become a leader in the EV markets. Next year, a next-generation EV model equipped with an EV-only platform will be launched," Chung said. 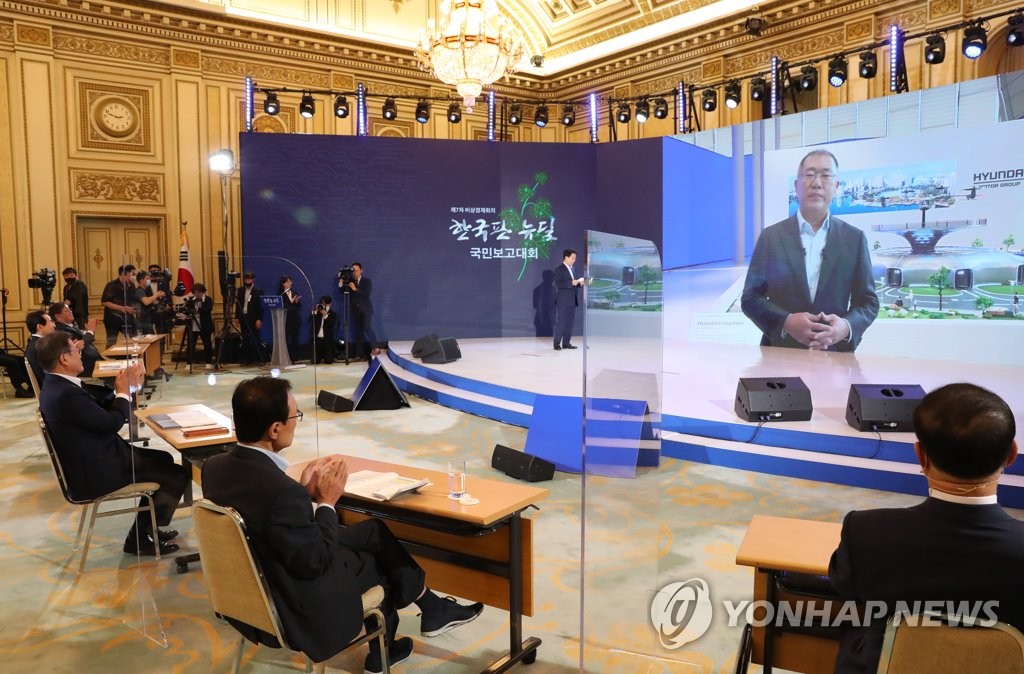 The briefing was part of the Moon government's New Deal plan aimed at transforming the country into a global "pacesetter" with a low-carbon economy.

Hyundai Motor Group is pushing to mass produce an EV model based on its own EV platform called the electric-global modular platform (E-GMP) next year.

The new EV model can be fully charged in only 20 minutes and can travel up to 450 kilometers on a single charge, Chung said.

Hyundai Motor and its smaller affiliate Kia Motors Corp. have sold a combined 270,000 electric vehicles in South Korea and overseas markets since 2011.

The two carmakers plan to unveil 44 eco-friendly vehicles, including 23 all-electric ones under the three separate brands of Hyundai, Hyundai's independent brand Genesis and Kia, by 2025.

Currently, the group's pure electric models are Hyundai's Kona EV and Ioniq Electric and Kia's Soul EV and Niro EV. An all-electric model under the Genesis brand is not available for now.

In recent years, global carmakers have stepped up efforts to go electric amid tightened regulations on emissions of greenhouse gases, which scientists say are to blame for global warming.

To compete with global EV leaders, such as Audi and Mercedes-Benz, Hyundai has been looking for ways to strengthen or form business ties with local conglomerates Samsung Group, LG Group and SK Group in EVs and joint investments in overseas startups with advanced technologies in future vehicles.

Hyundai targets over 10 pct of global EV market in 2025

Hyundai targets over 10 pct of global EV market in 2025