The country's jobless rate rose by 0.3 percentage point on-year to 4.3 percent in June, and the number of employed people fell to 27.05 million, according to the data compiled by Statistics Korea.

The employment rate for young adults -- those aged between 15 and 29 -- also fell 1.2 percentage points on-year to 42 percent last month.

The coronavirus outbreak has hit temporary workers hard, with the number of those workers plunging by 408,000 in June, the data showed.

Finance Minister Hong Nam-ki expressed concerns about the latest jobs data, citing a loss of 65,000 jobs in the manufacturing sector.

The pace of job losses has slowed since April, but the government will continue to step up efforts for private firms to retain jobs, Hong said. The nation shed 476,000 jobs in April and 392,000 jobs in May.

June's tumble was attributed to the COVID-19 outbreak, which has hindered consumer spending and corporate activities, as people have been urged to avoid going out to help curb the spread of the disease.

By industry, the accommodation and food service segment saw a decrease of 186,000 jobs last month and the wholesale and retail sector lost 176,000 jobs.

In contrast, the social welfare sector gained 164,000 jobs in June, and the farm and fisheries sector added 52,000 jobs.

"The COVID-19 outbreak is affecting job markets in all industrial sectors and the wholesale and retail sectors were the hardest hit," Chung Dong-myung, a senior official at Statistics Korea, said. 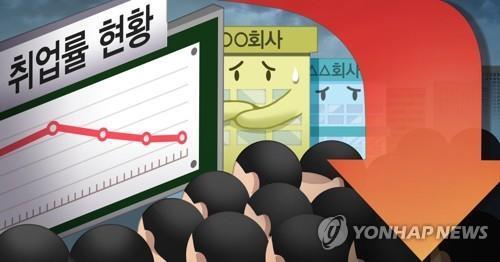