SEOUL, July 15 (Yonhap) -- The U.S. Forces Korea (USFK) has told its troops to follow the anti-coronavirus beach use guidelines that the southeastern city of Busan issued earlier this week after unruly July Fourth celebrations by some American service members raised the ire of local residents.

Earlier this month, unidentified American service members were accused of causing trouble on Haeundae Beach in Busan without wearing face masks despite a continued surge in COVID-19 cases, according to local authorities.

Dozens of complaints from citizens were made about their wild acts, such as shooting firecrackers toward citizens, traffic accidents and drunk driving, which prompted USFK to express regret and vow to take appropriate action for those involved.

On Monday, the Busan city government issued beach use guidelines, including the mandatory wearing of masks on Haeundae, Songjeong, Gwangalli and other beaches in the city, and the banning of eating and drinking on the beaches.

The guidelines, set to take effect Monday, call for issuing a warning to first-time violators and then up to a 3 million-won (US$2,498) fine for repetitive violators.

USFK also called for refraining from handshaking, or any other action that could lead to droplet transmissions, such as singing or screaming.

In response to growing concerns over a surge in COVID-19 cases among newly assigned USFK individuals, Commander Gen. Robert Abrams said the military has been implementing stringent measures to stop the spread of the virus.

"We leave no margin for an imported case to infect others," Abrams tweeted Wednesday. "We're not perfect, but we're doing our part to #KilltheVirus."

This month alone, USFK reported a total of 38 infections, including 11 cases Monday, all of whom tested positive upon arrival or during their mandatory two-week quarantine period after arrival from the U.S. It has been nearly three months since USFK has reported a local infection.

The recent uptrend has sparked calls by local residents and health authorities for tougher entry procedures for U.S. service members. 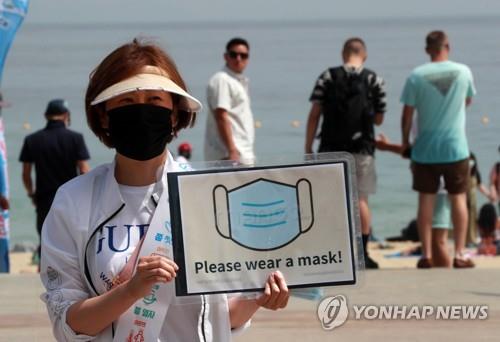