SEOUL, July 15 (Yonhap) -- The Navy and the Coast Guard staged a helicopter landing drill on an amphibious assault ship Wednesday in a move to enhance their disaster relief capabilities, officials said.

The training was carried out in waters near the southern port city of Busan earlier in the day, involving the 14,500-ton Dokdo ship, two helicopters and eight Coast Guard pilots, according to the Navy.

Twelve pilots from the fire agency and the police also took part in the exercise, it added.

Wednesday's event was in part to help the chopper pilots earn qualifications for deck landing necessary for operations on landing ships in case of an emergency, the Navy said.

As the country's first large-scale amphibious assault ship, Dokdo is equipped with a deck that can manage five choppers at one time. The multipurpose ship is capable of undertaking a variety of missions, including disaster relief. 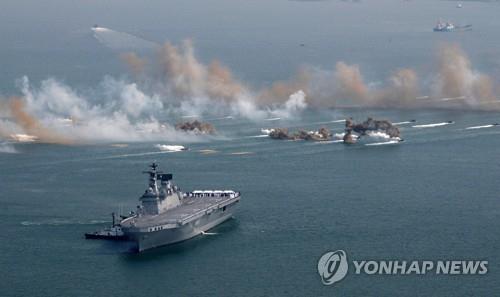