SEOUL, July 15 (Yonhap) -- Around this time in a normal South Korean baseball season, teams would be heading into the annual All-Star break. For a few days, players battling through dog days of the summer would have a chance to get their feet up and escape from the grind of a long season.

Alas, this hasn't been a normal season in the Korea Baseball Organization (KBO). There will be no midseason break this time around, with the coronavirus pandemic having wreaked havoc on the schedule. And managers for the league's two best teams so far, the NC Dinos and the Kiwoom Heroes, said this week they are bracing for a particularly long summer.

The 2020 playing calendar has been affected by the virus in more ways than one. 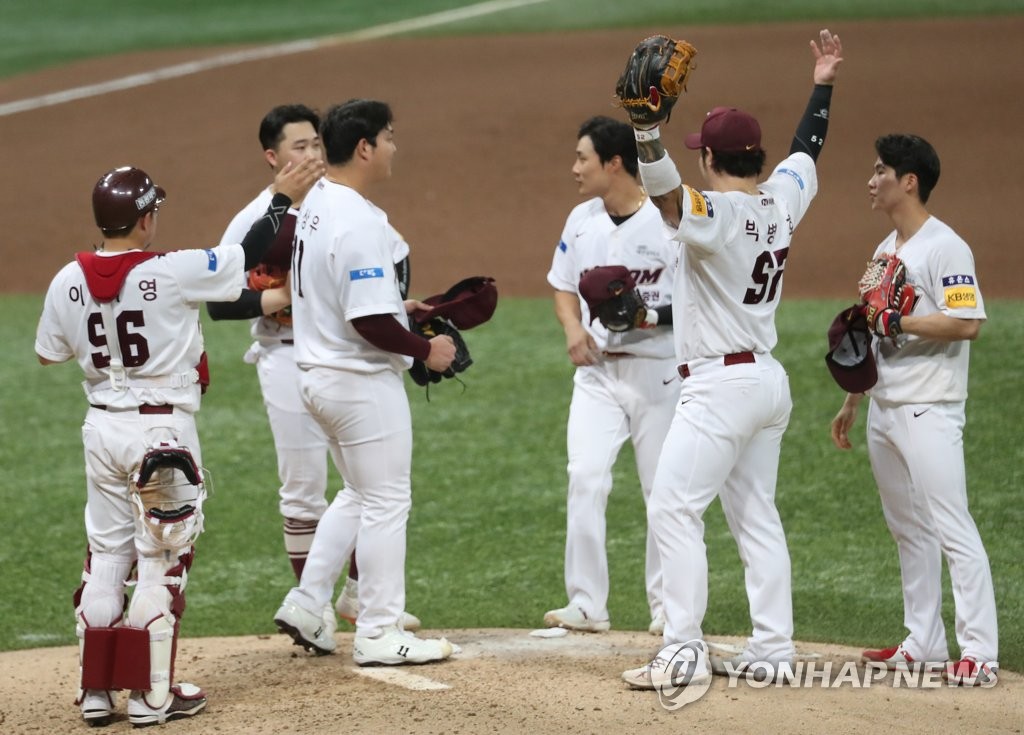 In late March, the Tokyo Olympics got pushed back by a year due to the pandemic. The delay negated the need for the KBO to go on a midseason hiatus during the Summer Games to accommodate the national baseball team competing in Japan. The league had scheduled an Olympic break for July 24-Aug. 10. Except for those called up for national team duty, this would have been a nice respite during the middle of the summer.

Before the Olympic Games were postponed, the KBO had already decided to delay the start of its regular season from March 28 to later in the spring. Then on April 21, the KBO said the season would open on May 5.

In announcing that decision, the KBO also said there will be no All-Star Game, which would have taken place sometime in July. The KBO was also intent on squeezing the full, 144-game schedule into a tighter-than-usual window. That meant double headers and games on Monday -- typically the only offday of the week -- would become the new norm.

Prior to Tuesday's game against the Heroes in Seoul, NC manager Lee Dong-wook was asked about monitoring the workload of his prized left-hander Koo Chang-mo. The 23-year-old ace, 8-0 with a sparkling 1.48 ERA, has pitched 73 innings in 11 starts, and his career high is 133 innings from 2018, when he split time in the rotation and bullpen. It's not quite halfway through the season, and no starter is averaging more innings per outing than Koo's 6 1/3.

The manager said it's not just Koo whose load needs to be managed during this unprecedented season. 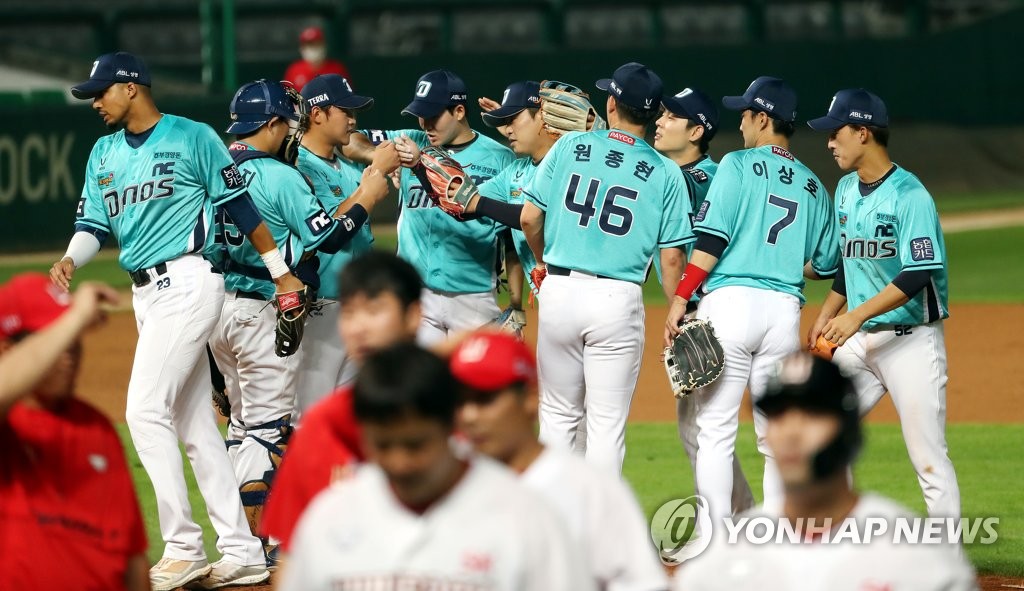 "We have no All-Star break this year, and we have to keep our eye on other starters, too," Lee said Tuesday before taking on the Heroes at Gocheok Sky Dome in Seoul. "We will need some fill-in starters to come up (from the minors) and give the current guys some breather."

The Dinos' rotation also features Drew Rucinski, Mike Wright and Lee Jae-hak, who have each made a dozen starts so far. Three other pitchers have combined for 11 more starts. Collectively, the Dinos have the league's best starting pitching ERA with 3.58, with no one else sitting below 4.00. Dions' starters have eaten up the third-most innings (327), while allowing the fewest base runners per inning (1.24), the lowest opponents' batting average (.241), on-base percentage (.311) and on-base plus slugging percentage (.687).

Kiwoom manager Son Hyuk has previously stated he was worried about damaging effects the 144-game schedule in a compressed season could have on pitchers. It may already be happening to his own team, as the Heroes have the worst starters' ERA in July with 10.45. And that's after Jake Brigham tossed five innings of one-run ball in Tuesday's start. Their starters had the KBO's best ERA in June with 3.16.

Prior to Tuesday's game, Son reiterated his concerns about the tight schedule.

"It'll be the same for every team, and I think mental fatigue will be a major factor," Son said. "I think it's important for players to get away from baseball for a few days and not think about the game. But we won't have that this year, since there won't be the All-Star break." 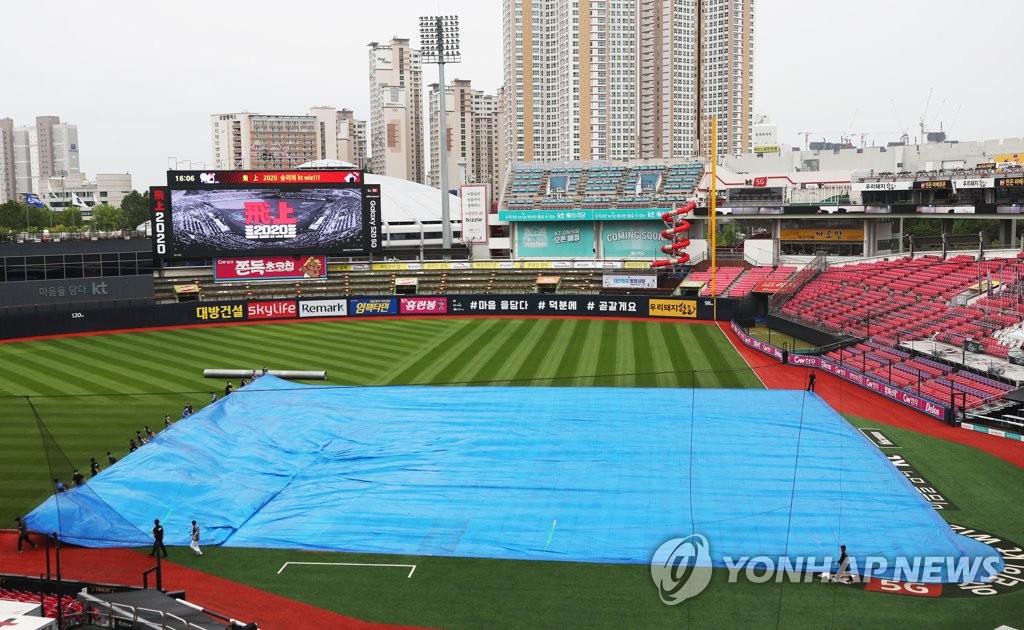 With the annual monsoon season in full swing, there have been a handful of rainouts since late June. There were three sets of double headers on June 25. And the entire five-game slate was wiped out by rain last Sunday, leading to five Monday games being scheduled for Monday for the first time in league history. Three of those were postponed again due to rain.

One of those postponed games would have pitted the Dinos against the LG Twins at Jamsil Baseball Stadium in Seoul. Their game on Sunday was called off in the bottom third with the scored tied 2-2. Following a lengthy delay, it took nearly two and a half hours to get to that point. There have been full, nine-inning games that have been completed in shorter time.

If these two teams had played on Monday, then they were looking at potentially taking the field for 13 straight days, from July 7 to 19.

"Monday games, Opening Day in May, no All-Star break ... this is all new to everybody," Lee said. "I don't want to blame anyone because we've had some bad weather. But if a team gets into a situation where playing 13 days in a row becomes a possibility, then we'd have to reconsider the playing schedule."