SEOUL, July 16 (Yonhap) -- President Moon Jae-in said Thursday his government will use all available measures in the fight against property speculation and soaring housing prices, especially around the greater Seoul area with half of South Korea's 52-million population.

He vowed to "listen to the voice of opposition parties" demanding the expansion of housing supply and to take necessary steps.

"The government will push for every necessary means to curb property speculation and stabilize housing prices," Moon said during a televised speech at the opening ceremony of South Korea's 21st National Assembly. 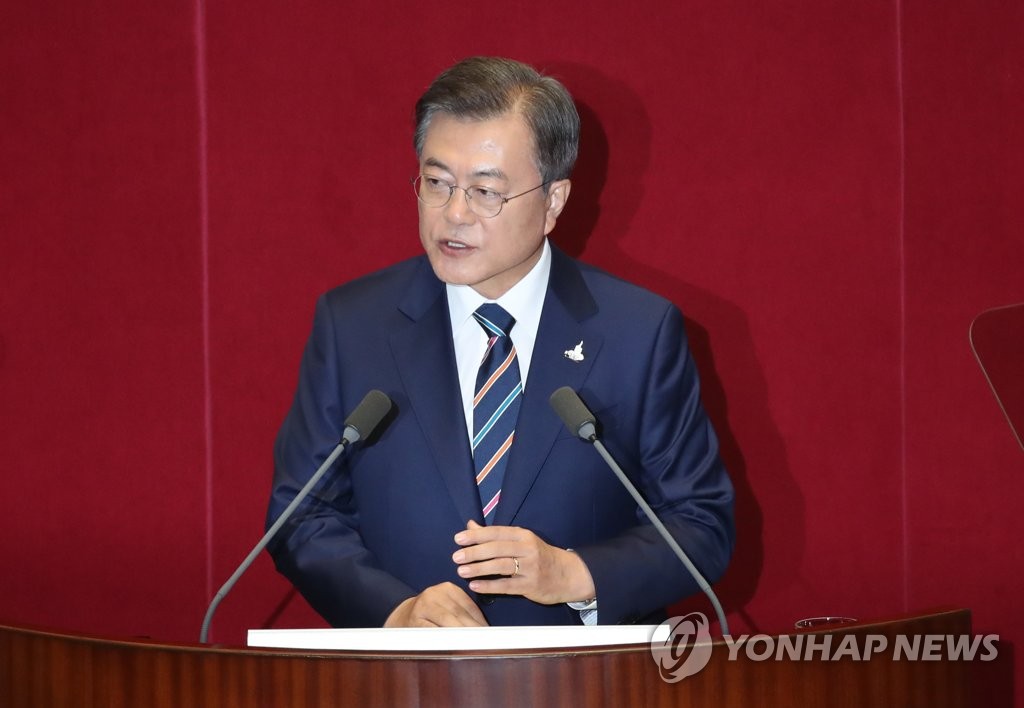 It came hours after reports that his approval rating has dropped to a nine-month low of 44.1 percent in Realmeter's latest survey, while the disapproval rating jumped to 51.7 percent. Cheong Wa Dae officials agree that unrelenting housing price hikes are among the key reasons for Moon's falling popularity.

Moon's liberal administration has already signaled the reversal of its longstanding view that the housing supply is not insufficient in Seoul and nearby cities. Until recently, it placed a focus on pressing families owning two or more houses to sell properties. It unleashed several packages of tough measures, such as mortgage loan restrictions, and plans to jack up property ownership and capital gains taxes.

But prices of real estate, in particular apartments, have continued to soar, driven by ultra-low interest rates and excess liquidity.

Moon called for lawmakers' support for the government's efforts to stabilize the housing market.

"Now, the foremost legislation-related task for the people is real estate measures," the president said. He was referring to related bills submitted to the parliament.

In addition to the search for ways to increase the housing supply, he said, the government will continue efforts to "make it clear that (people) can't make money any more through real estate speculation by elevating burdens on multiple house owners over house ownership and sharply raising capital gains taxes."

Moon also called for bipartisan cooperation on the Korea peace process, which he described as "vulnerable." 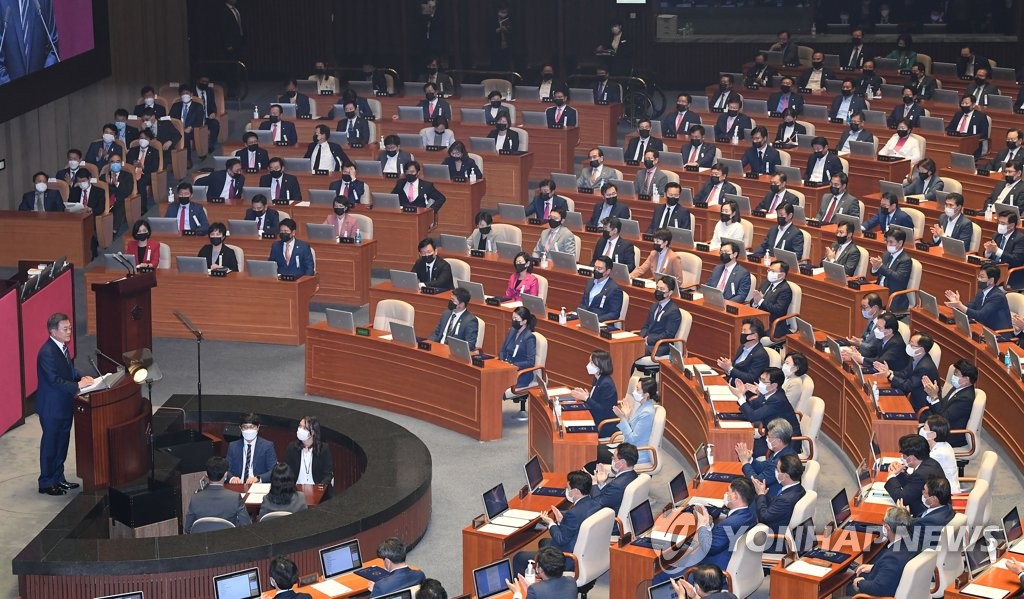 "South-North (Korea) relations and North Korea-U.S. relations are like walking on ice," he said, stressing that now is the time to pool wisdom "beyond partisan interests" for peace.

Moon asked the National Assembly to "institutionalize the accomplishments of South-North summit talks so far." The government and the ruling Democratic Party have sought the ratification of Moon's summit agreements with North Korean leader Kim Jong-un signed in 2018: the Panmunjom Declaration and the Comprehensive Military Agreement mainly on easing border tensions.

If the parliament guarantees the "irreversibility" of such peace efforts, it would further solidify the foundation for peace on the peninsula, Moon said.

He reaffirmed his government's three principles on Korean Peninsula affairs: zero tolerance for war, a mutual security guarantee and co-prosperity.

"If the two Koreas cooperate on the basis of trust, it would benefit both of them," Moon said, mentioning the reconnection of cross-border railways and roads and links to the continent that would lead to "tremendous gains of the logistics economy."

He again presented a vision for a "peace, security and life community" to be led by East Asia.

"It can be a method for the permanent denuclearization of the Korean Peninsula or regional cooperation in response to infectious disease crises including COVID-19," he said.

Throughout his half-hour speech in front of 300 lawmakers, Moon repeatedly used the word "cooperation." Other keywords included economy, COVID-19 and the Korean-version New Deal.

On the previous National Assembly, he cited its "failure of politics of cooperation."

"The 21st National Assembly should liquidate the politics of confrontation and hostility and open a new era of politics of cooperation," he emphasized. "It's more urgent in the midst of a global crisis and upheaval like now."

He requested parliamentary support for his New Deal project aimed at creating jobs and reinvigorating the nation's economy sapped by the coronavirus pandemic.

"The Korean version of the New Deal is a key to a new future," he said. "It's a development strategy (for South Korea) to leap to a leading country."

On Tuesday, the president announced plans to invest 160 trillion won (US$133 billion) by 2025 to create 1.9 million jobs under his fresh signature policy initiative.

He also urged the ruling and opposition parties to wrap up the legal process at an early date to choose the head of a special agency tasked with investigating corruption among senior public servants. 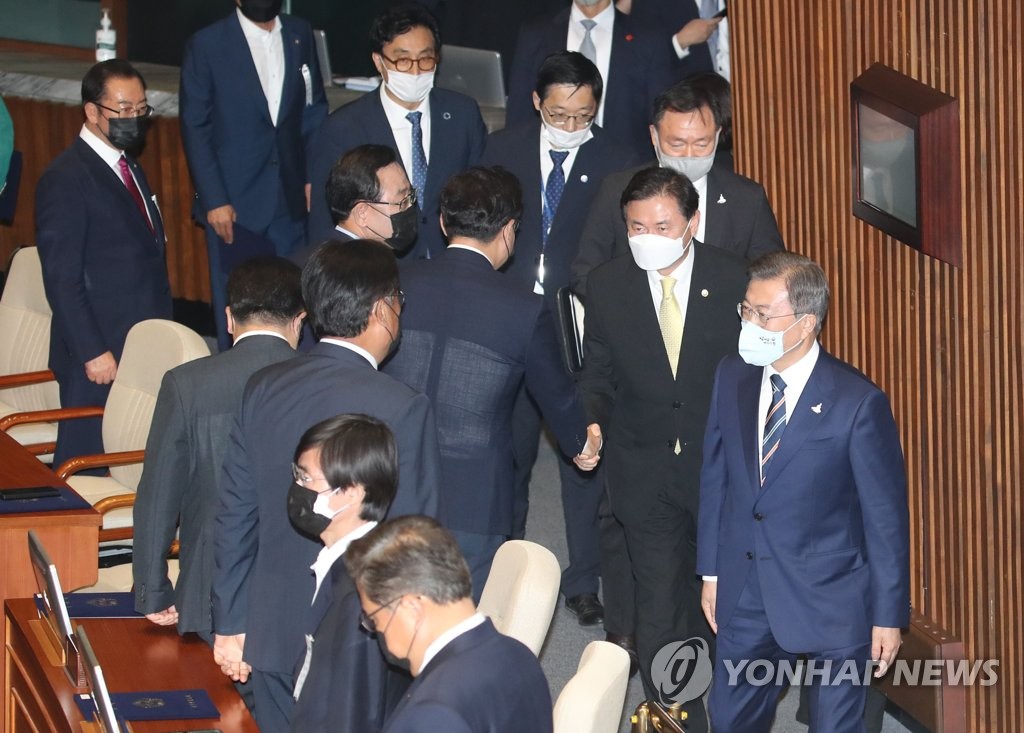 A law on establishing the independent body, provisionally named the Corruption Investigation Office for High-ranking Officials (CIO), took effect earlier this week. It's a main element of the Moon administration's push for the reform of the state prosecution service and other powerful institutions, including the National Intelligence Service.

The main opposition United Future Party is against the creation of the CIO, saying it could be exploited as an organ to help cover up potential wrongdoing by Moon and his aides.

The parliament's opening ceremony was held three months after the lawmakers were elected.

Their tenure began in late May, when Moon was initially supposed to visit the National Assembly for the speech. He made changes to the text several times due to the long delayed ceremony, according to Cheong Wa Dae.