SEOUL, July 16 (Yonhap) -- Gyeonggi Province Gov. Lee Jae-myung will retain his position, as the Supreme Court on Thursday sent his case back to a lower court for reconsideration, saying he should not be found guilty of violating election law.

The decision salvaged his governorship and political fate as one of the ruling party's potential presidential candidates.

"Lee is not punishable for spreading false information," for his remarks made during televised debate shows in the run-up to the 2018 local elections, Chief Justice Kim Myeong-su said in delivering a verdict on the case.

Lee's comments, which came during fierce debates with political opponents, should not be seen as a deliberate and determined act to spread misinformation, the chief justice said.

"It is more important to guarantee freedom of expression (during a debate) to offer (debaters) room, free of legal responsibilities," Kim said, adding that it is impossible to hold a politician accountable for every inaccurate expression he makes. 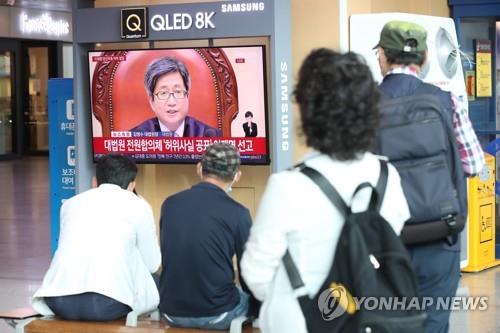 The governor was indicted on four charges, including power abuse and violating the national election law in December 2018, related to allegations that he used his official position to lock his elder brother in a mental hospital against his will in June 2012. Lee denied involvement in the forced hospitalization on television debate shows in 2018.

In May 2019, the Seongnam branch of the Suwon District Court found Lee not guilty of the four criminal charges. But the Suwon High Court fined him 3 million won (US$2,506) in September for spreading false information about the hospitalization on television. 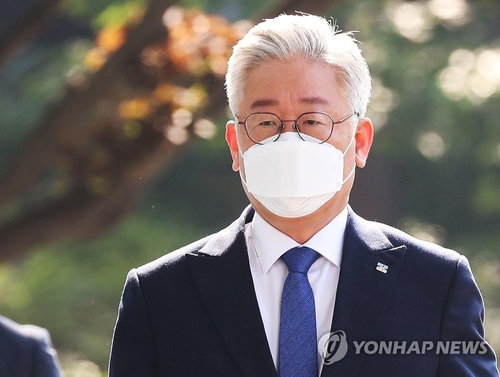 Lee's trial has attracted national attention for its political implications. He governs the country's biggest administrative division with a population of 13 million and is considered one of the ruling Democratic Party's strong presidential hopefuls. In 2017, he unsuccessfully ran against President Moon Jae-in in the party's presidential primary.

In a recent survey, he ranked second on a list of favorite politicians whom the respondents want for the next president.

The survey, conducted by Gallup Korea on 1,100 people and released last week, showed former Prime Minister Lee Nak-yon was cited the most often with 24 percent, followed by the governor with 13 percent.

Although his legal case is not fully closed, the win on Thursday is expected to give Lee Jae-myung badly needed political momentum and a breakthrough in the 2022 presidential race.

The court's decision also saved face for the ruling party after mayoralties in the country's two biggest cities, Seoul and Busan, were left vacant. Seoul Mayor Park Won-soon died last week in an apparent suicide after his former secretary filed a sexual harassment complaint against him. Busan Mayor Oh Ge-don stepped down in April amid sexual misconduct allegations. Both were affiliated with the ruling party.

Given the case's political importance and the level of public interest, the ruling was broadcast live on television and YouTube, for the second time ever. The court broadcast its first-ever live ruling in August on the corruption case of former President Park Geun-hye.

Right after the verdict came out, Lee thanked the court for what he called a "fair and right decision" on his Facebook page.

"I feel thankful for the opportunity to keep working, but my shoulders feel heavy with responsibilities at the same time," he wrote. "I will walk forward to create a fair world, a world where everyone lives harmoniously." 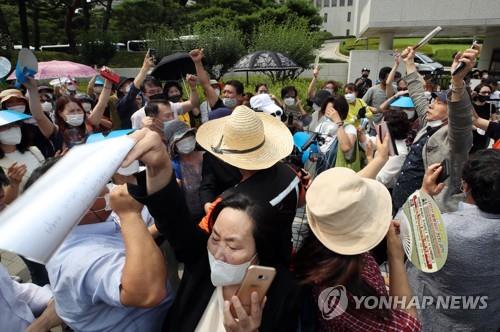