Samsung said Lee discussed Samsung Electro-Mechanics' plan for its automotive MLCC business, as demand for such products is expected to sharply increase on the back of developments in electric vehicles, autonomous driving technology, as well as 5G and artificial intelligence solutions.

"The pace of change is getting faster," Lee said. "We should lead innovation from the front." 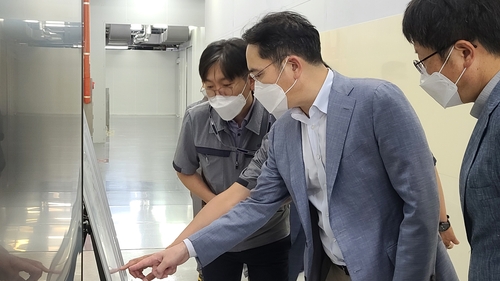 Lee previously met with Samsung Electro-Mechanics officials in June last year and checked on their investment and growth strategies.

In his recent visits, Lee has been consistently emphasizing that Samsung needs to overcome global uncertainties caused by the COVID-19 pandemic and renewed tensions between the United States and China. Lee's on-site inspection also comes amid speculation that the prosecution could indict the heir apparent later this month over the controversial merger of two Samsung units.

Prosecutors suspect that Lee and the group's senior executives were involved in a calibrated scheme to intentionally lower the value of Samsung C&T Corp. prior to its merger with Cheil Industries Inc. in 2015, so as to facilitate Lee's managerial succession from his ailing father, Lee Kun-hee.

An independent panel of experts -- made up of civil activists, legal experts and others -- concluded last month that prosecutors should not indict Lee.

But since the panel's decision is not legally binding, there has been speculation that prosecutors could push for the indictment of Lee.