SEOUL, July 16 (Yonhap) -- Fourteen more Americans affiliated with the U.S. Forces Korea (USFK) have tested positive for the new coronavirus upon arrival in South Korea, the U.S. military said Thursday, amid growing concerns over a surge in imported virus cases.

USFK has seen a marked increase in the number of COVID-19 patients among newly assigned service members and related personnel in recent weeks along with the fast spread of the virus in the U.S.

The latest cases brought the total number of USFK-related infections to 88. Of them, 52 were reported in July.

Of the 14 new patients, 12 were service members and two were dependents, and they tested positive after arriving here between July 9 and 15, according to USFK.

Nine soldiers and two family members arrived at Osan Air Base in Pyeongtaek, 70 kilometers south of Seoul, on a U.S. government-chartered flight. The remaining three arrived at Incheon International Airport, west of Seoul, from their home country on commercial flights, it added.

Of them, five individuals displayed "very minor symptoms," such as a headache or runny nose, USFK said. It is not immediately known if they were symptomatic before their departure.

"All individuals were tested prior to entering quarantine, and have since been transferred to an isolation facility designated for confirmed COVID-19 cases on either Camp Humphreys or Osan Air Base," USFK said in a statement.

On Thursday, South Korea added 47 imported COVID-19 cases, which is the highest since March 25 when the figure stood at 51, according to the Korea Centers for Disease Control and Prevention (KCDC). The local infections were 14, and the country's total caseload came to 13,612. 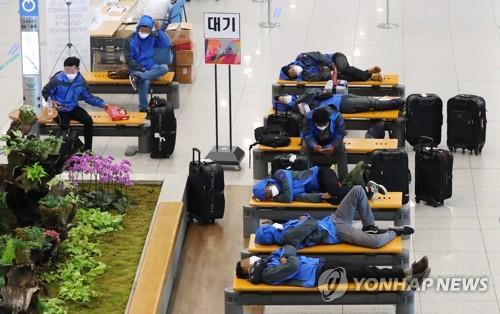