The world's largest smartphone maker on Sunday released a 13-second video for its Aug. 5 Galaxy Unpacked event on its Twitter account, with a message "one fold, infinite possibilities."

The video shows Samsung's mystic bronze-colored droplet transforming into a butterfly-like object, which denotes the Galaxy Fold smartphone which had the butterfly image wallpaper when it was first released last year. 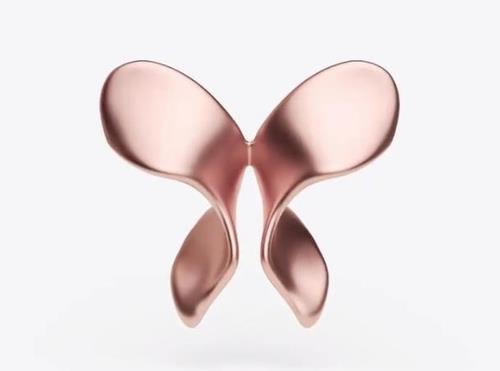 There has been speculation that Samsung's Galaxy Fold 2 may not be introduced at the upcoming Unpacked event. But industry insiders said the latest teaser confirms that the South Korean tech giant will unveil its latest foldable smartphone at the online event, alongside other new mobile devices, such as the Galaxy Note 20 phablet and the Galaxy Buds Live wireless earbuds.

"Like the Galaxy Note 20, the Galaxy Fold 2 could come up with a lower price tag compared to its predecessor to boost sales," an industry official said.

Industry insiders predicted that Samsung's Galaxy Fold 2 may be available on the market after September following the Galaxy Note 20's release, which is expected to be launched on Aug. 21 in South Korea.

The specs of the Galaxy Fold 2 have not been confirmed, but foreign tech reviewers have predicted that the Galaxy Fold 2 will feature a 7.6-inch screen when unfolded, while having a 6.23-inch cover display, both larger than its predecessor's 7.3-inch and 4.6-inch displays, respectively.