SEOUL, July 20 (Yonhap) -- The police will wait for the prosecution before taking action in an information leakage case pertaining to the death of Seoul Mayor Park Won-soon, the police chief nominee said Monday.

"Since multiple complaints (on the suspected leak) have been filed with the prosecution, it would be better for us to decide on the launch of investigation after watching how the prosecution proceeds with the complaints," Kim Chang-ryong, who was nominated as commissioner general of the National Police Agency, said during his confirmation hearing at the National Assembly.

The mayor was found dead on a hillside in Seoul in the early hours of July 10 in an apparent suicide, less than two days after one of his former secretaries filed a sexual abuse complaint against him.

The police briefed the presidential office Cheong Wa Dae on the complaint at 4:30 p.m. on July 8, on the same day that it was filed.

"Our internal policy requires us to report an important case that draws public attention (to the presidential office) at its early stages of development," Kim said.

He stressed that there have been no circumstances where information was leaked from the police. He said he will take responsibility if police are found to have leaked information.

Having been bombarded with questions from lawmakers, he conceded that the action was according to the police's internal, unwritten but common rule.

He also said an investigation or indictment from the sexual harassment allegation is not possible as the defendant is dead.

"It is very important to find the truth, but it should be found out within the boundary of the police's capacity and within the law," he said.

Asked about the presumed copy of the complaint, which has been circulated on social media, he dismissed it as a fake.

He added that the police would be able to figure out the veracity of a large portion of the allegations when Im Soon-young, the late mayor's special gender advisor, attends a police investigation.

A key witness in the case, she is said to have asked Park if he was involved in a "disgraceful" incident, at around 3 p.m. on July 8 before the complaint was filed against him, indicating she might have known about her boss's alleged sexual misconduct even before the accuser brought the case to the police.

The Seoul Seongbuk Police Station called in Im later in the day to investigate the allegations.

After the 12-hour session, the lawmakers adopted a confirmation hearing report approving of Kim.

The report assessed him as well-versed in police administration and committed to law enforcement reforms. 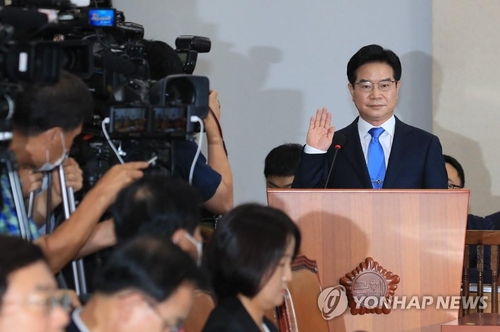