SEOUL, July 22 (Yonhap) -- South Korean babies born in 2018 are expected to live over 82 years, two years longer than the Organization for Economic Cooperation and Development's average, as many take care of their health with regular medical checkups and treatment, data showed Wednesday.

The figure remains unchanged from the year before, according to the Health Statistics 2020, released by the Paris-based organization.

Japan ranked No. 1 at 84.2 years, with Germany and the United States having lower life expectancy numbers at 81 years and 78.7 years, respectively. 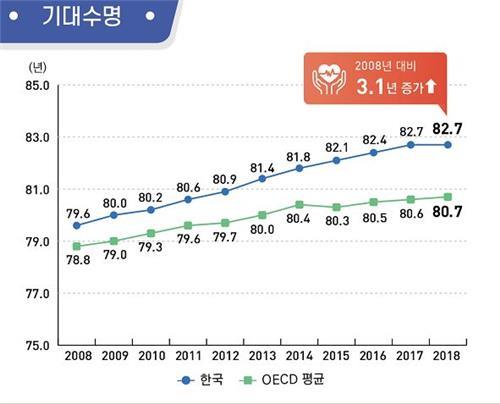 The latest statistics, released by the Ministry of Health and Welfare here, also showed South Koreans died less from serious illnesses, such as cancer and cardiovascular-related diseases. The country had the second-lowest obesity rate for people over 15 among the OECD member countries at 34.3 percent.

But South Korea's suicide rate of 23 per 100,000 is the second highest after Lithuania and much higher than the OECD average of 11.4 percent, although it has been declining since 2009, when it stood at 33.8, the data showed.

The percentage of South Koreans who smoke every day reached 17.5 percent, slightly above the OECD average of 17 percent, with annual alcohol consumption of 8.5 liters being slightly under the 8.8 liters for other OECD members.

The data showed that the percentage of people who thought they were healthy, reached just 32 percent, the lowest among the OECD members. The OECD average for the survey was 67.9 percent.

South Korea's medical sector infrastructure, such as high-tech equipment and hospital bed numbers, was generally better than other countries although the country trailed in the number of practicing doctors and nurses that stood at 2.4 and 7.2, respectively, per 1,000 people.

The country's current annual health expenditures stood at US$3,085.2 per capita, with the number expected to rise steadily going forward due to population aging.