SEOUL, July 22 (Yonhap) -- Exports by South Korean small and medium enterprises (SMEs) sank at a double-digit rate in the second quarter of the year due to the coronavirus pandemic, government data showed Wednesday.

Local SMEs' overseas shipments came to US$22.5 billion in the April-June period, down 13.4 percent from a year earlier, according to the data from the Ministry of SMEs and Startups, marking a sharp turnaround from the 2 percent on-year increase in their exports in the first quarter, which were worth $24.2 billion.

Smaller firms' overseas shipments shrank 6.2 percent from a year earlier to $46.7 billion in the first half of the year. 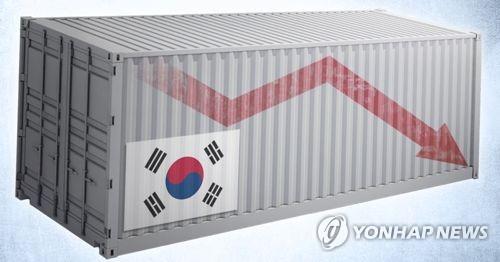 The ministry said the second-quarter fall came as exports of key items to major markets plunged due to the prolonged coronavirus crisis.

Yet the pace of decline sharply slowed down to 1.9 percent in June from a 23.2 percent plunge in May and a 13.8 percent dip in April.

"Exports of chip-making equipment and cosmetics improved drastically in June on the back of recoveries in manufacturing activity and consumer spending in major markets, such as the United States and China," the ministry said.

Meanwhile, SME exports of cleanroom garments, latex gloves, hand sanitizer and other quarantine goods skyrocketed 350 percent on-year to $1.18 billion in the first half due to the coronavirus pandemic.

Overseas shipments of coronavirus test kits stood at $520 million in the January-June period, up a whopping 1,130 percent from a year earlier, according to the data.
(END)