SEOUL, July 22 (Yonhap) -- New allegations of physical and verbal abuse emerged Wednesday against a coach and an athlete in an ongoing triathlon scandal, with the latter maintaining that she had done nothing wrong.

During a parliamentary hearing, Rep. Lim O-kyeong of the ruling Democratic Party presented new pieces of evidence of abuse against Kim Gyu-bong, head coach of the semi-pro club at Gyeongju City Hall, and his athlete, surnamed Jang. 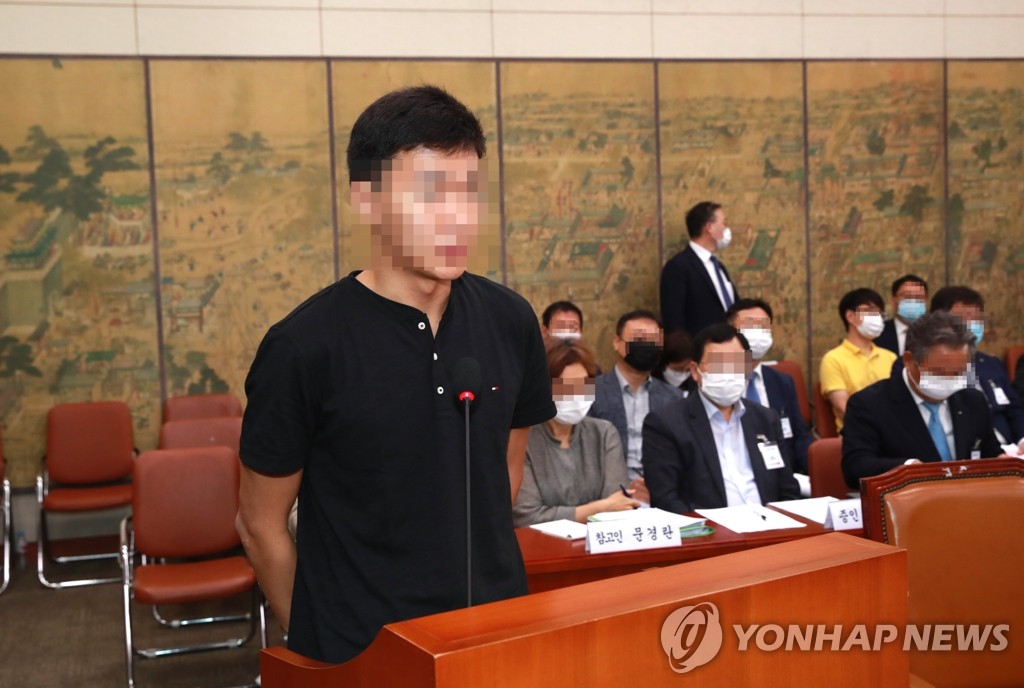 Kim, Jang, another triathlete, Kim Do-hwan, and former team therapist Ahn Joo-hyeon are all being accused of having abused the late Gyeongju athlete Choi Suk-hyeon. Choi took her own life in late June after her pleas for help went unanswered by regional and national sports authorities. She had left behind audio recordings of occasions when she was apparently struck and verbally abused by these four individuals, prompting legal and sports authorities to belatedly begin investigating the case.

The National Assembly's committee on sports convened the hearing, but only Kim Do-hwan attended the session. Coach Kim was arrested Tuesday.

At the hearing, Lim brought written testimonies that Choi submitted to Gyeongju officials during their preliminary probe in March. The lawmaker also gathered statements from other triathletes from Gyeongju who said they, too, had been abused.

Kim Do-hwan, who has admitted to his wrongdoing and apologized to Choi's family, said Wednesday he was also abused by his coach and he saw the instructor strike his teammates. 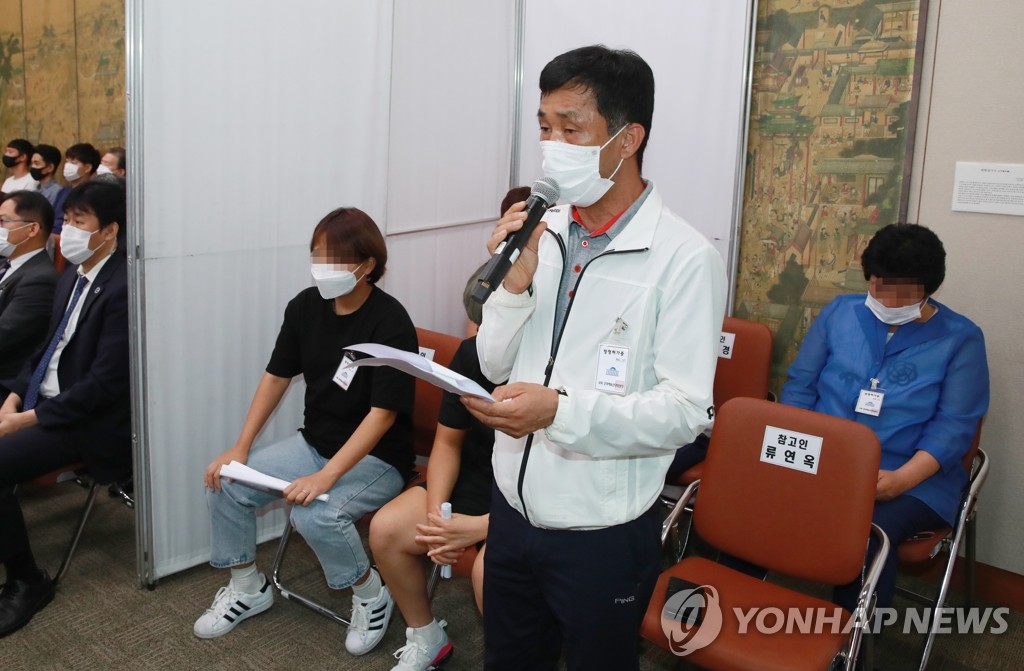 According to Rep. Lim, former and current Gyeongju triathletes had been coerced into speaking favorably about coach Kim and Jang and testifying against Choi during preliminary police investigations in May.

Lim said those athletes told police that Kim and Jang had always taken good care of them and Choi was a habitual liar.

But one of the athletes acknowledged Wednesday that the coach had threatened retaliation against anyone who supported Choi's claims.

"The coach said he'll go after anyone who stabbed him in the back," the athlete said. "He also said, 'So I hit people, but you shouldn't try to ruin my livelihood and career.'"

Other athletes testified that they all met with Kim before writing testimonies for police, and the coach reviewed each one of them.

"Coach Kim didn't just commit verbal and physical abuse. He tried to cover up the whole thing and threatened his own athletes," Lim said.

Choi's father, Choi Young-hee, said he had heard that alleged abusers were trying to destroy evidence and that they were forcing younger athletes to lie to police.

"The toughest thing for Suk-hyeon was that there wasn't anyone who would listen to her," the father added. "I think she made the choice that she did because she was willing to sacrifice herself if that's what it took to have the truth come out."

Coach Kim has pointed to Ahn as the only abuser and argued he had to restrain the therapist on occasions.

Also during Wednesday's hearing, Choi's former teammates testified that Jang had physically and verbally abused many athletes and that she even ordered one younger teammate to hit others with a piece of lumber.

That athlete attended the hearing and said, "If I hadn't followed her order, she would have bullied me and driven me insane, too. I am really ashamed that I trusted and followed someone like her."

He added that it was "ridiculous" that Jang is still denying all allegations against her despite mounting evidence.

"We had to apologize to her for no reason. She basically ran the whole team at Gyeongju and there wasn't anything we could do," the athlete said. "Those people hit us every day, so they may not remember much. But we've been traumatized for our whole lives."

The athlete added, "I still have nightmares with Jang in them. I hope she will offer a sincere apology and receive her due punishment." 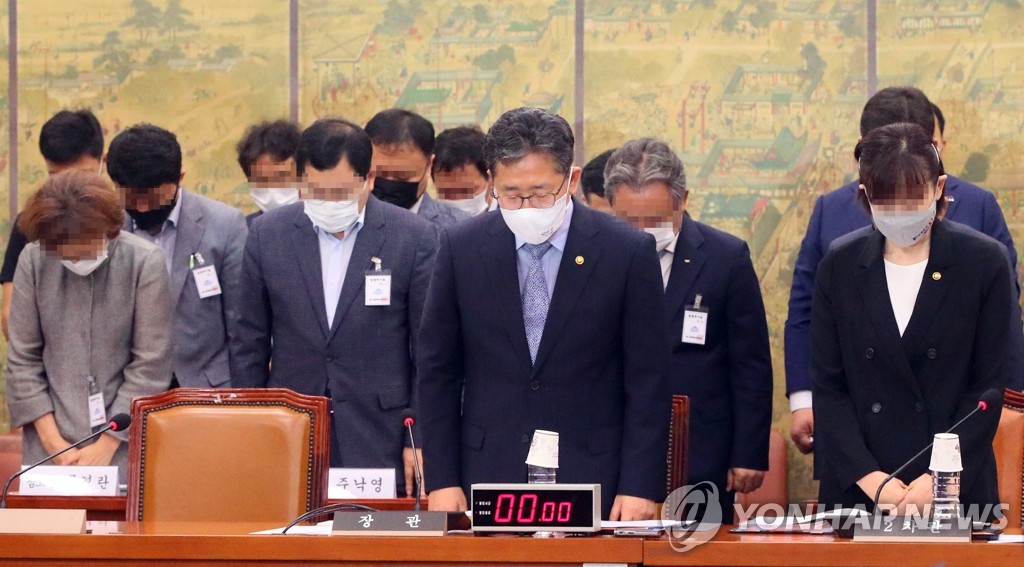 In a written statement submitted to the hearing, Jang claimed that she was the biggest victim in this scandal and that Ahn was the only person at fault.

"Coach Kim once asked me why I had hit my teammates, and I kept telling him I didn't do anything wrong," Jang wrote. "I even told him that if I had struck other athletes, I'd just quit on the spot."

With allegations and denials flying, members of the parliamentary sports committee also grilled the Korean Sport & Olympic Committee (KSOC) and the sports ministry over their inadequate handling of the preliminary investigation into Choi's claims.

About two months before her death, Choi filed a petition with the KSOC, seeking punishments for her alleged abusers, but the sports body took no action.

It was only after Choi's passing that sports officials began moving, and the Korea Triathlon Federation banned coach Kim and Jang for life and suspended Kim Do-hwan for 10 years. All three have appealed those penalties.