(ATTN: UPDATES with additional background in paras 11, 17-19)
By Byun Duk-keun 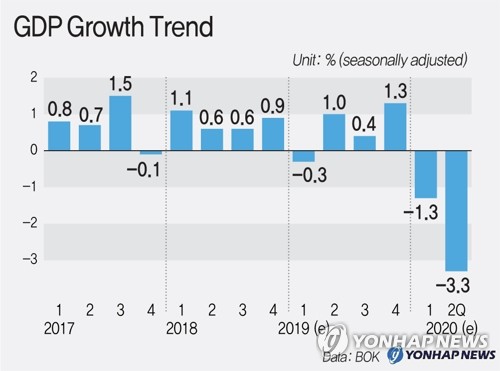 In its May projection, the BOK predicted the local economy to contract by as much as 1.8 percent on-year in 2020 under what it then called the worst possible scenario, highlighted by a global resurgence in COVID-19 infections.

Domestic consumption continued to remain weak in the second quarter, slipping 4.1 percent on-year, which marks a slight improvement from a 4.8 percent on-year contraction in the first quarter.

To help boost local spending, the central bank has so far delivered two rate reductions, slashing the policy rate by 75 basis points to a record low of 0.5 percent.

The country's consumer prices, however, have been weakening, posting negative 0.3 percent on-year growth in May that apparently reflected slow demand at home.

Consumer prices remained unchanged from a year earlier in June.