The decision was confirmed earlier in the day during a policy coordination meeting between the ruling Democratic Party (DP) and the government. 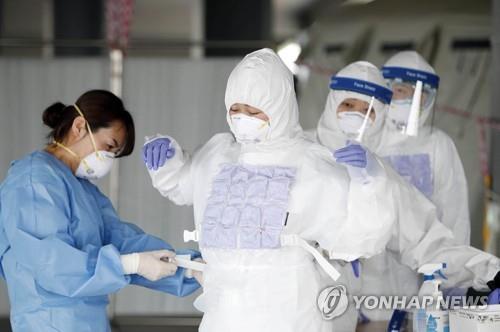 Under the decision aimed at ramping up medical services, the government plans to expand the admission quotas at medical schools by 4,000 over the next 10 years, starting in 2022.

This will increase the number of students admitted annually to medical schools to 3,458 in the 2022-2031 period, from the current 3,058, according to officials.

Some 3,000 of the additional 4,000 students to be admitted for medical degrees will be required to practice in provincial areas in fields dealing with severe diseases.

The rest of them will be made to specialize in particular studies, like epidemiology, biomedical medicine and general medicine science.

The government also plans to open a new public medical school in 2024 in North Jeolla Province while allowing the establishment of medical schools in regions where there are no medical education institutions.

"Sharply increasing the labor force for disease prevention and medical services is urgently needed in order to deal with a pandemic crisis, such as COVID-19," Rep. Cho Jeong-sik, the head of the DP's policy committee, said during the meeting.

Education Minister Yoo Eun-hae said that the so-called regional doctor system, to be available through the quota expansion, will provide quality health care services to people in provinces and narrow the regional gap in medical service availability.

It is the first time since 2006 that South Korea has increased the admission quotas for the highly competitive medical schools. The new quota increase will be implemented, in a phased manner, starting in 2022, according to officials.

The Korea Medical Association, an interest group that represents 130,000 doctors, held a news conference in front of the National Assembly on Thursday morning, urging the government to roll back what it called a "hasty and unilateral" decision.

A lack of medical personnel in some provinces as well as specific medical areas is not because of a shortage of doctors but because of "a failure in health and medical policies," it said in a statement. "Staffing up as a cure-all is doomed to fail, unless the government establishes a system where doctors can only focus on treating patients in their respective field or region," it said.

The group threatened to stage a general strike either on Aug. 14 or 18 in protest against the decision.

The Citizens' Coalition for Economic Justice, a civic group, also called for the plan to be reconsidered, claiming that the measure could only patch up the current problems, including persistent disproportionate numbers of doctors in different majors. The group suggested building medical schools with student quotas of 100-150 in each province. 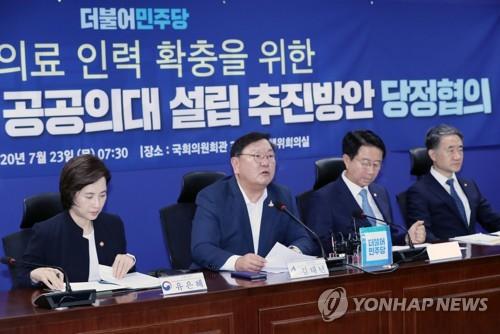