SEOUL, July 23 (Yonhap) -- Hundreds of soldiers took coronavirus tests after coming into contact with an outside counselor confirmed to have the virus, officials said Thursday, following revelations he visited other military units in addition to a front-line base that reported at least 14 cases this week.

Two of the 14 at the Army unit in Pocheon, some 45 kilometers north of Seoul, first tested positive Tuesday after showing COVID-19 symptoms the previous day, and the remaining 12 were found to have the virus after contact with the two colleagues.

The military and health authorities have been working to determine their route of infection, and the outside counselor, whose identity was withheld, was found to have had minor coronavirus symptoms when he visited the base last week, according to defense ministry officials.

Of the 14 patients at the barracks, 12 received career counseling from the outside counselor. The first patient at the unit began to have a fever three days after his visit, they added.

One of the counselor's family members, as well as a colleague who visited the base with him, also tested positive, the health authorities said.

"COVID-19 is presumed to have spread into the military unit by one of the two counselors," Kwon Jun-wook, deputy director of the Central Disease Control Headquarters, said.

The number of infections is feared to grow further, as the man then visited four other nearby units.

"Those who had close contact with the counselor are now undergoing virus tests," defense ministry deputy spokesperson Col. Moon Hong-sik told a regular briefing. "Contact tracing is under way to determine the exact infection route."

About 400 military personnel either await their test results or were to take the test, according to officials.

So far, the military reported 72 virus patients among its population. 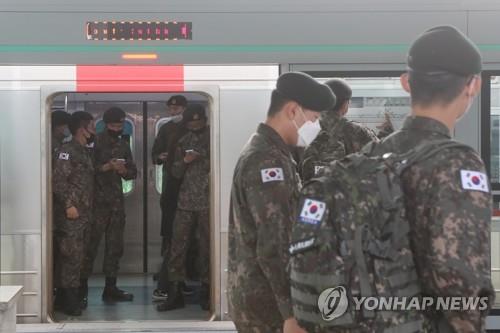