SEOUL, July 23 (Yonhap) -- North Korea could respond if South Korea and the United States exercise flexibility on their summertime joint military exercises as it could be seen as a "new message" for Pyongyang, unification minister nominee Lee In-young said Thursday.

Lee made the remarks during a parliamentary confirmation hearing as military authorities of South Korea and the U.S. are in discussion on whether to scale back or call off a major combined exercise reportedly scheduled for next month amid the global coronavirus pandemic.

"Should we exercise flexibility, such as downsizing the scale by around half or moving maneuver areas south of the Han River, North Korea could respond accordingly," Lee said when asked about what impact such drills would have on inter-Korean relations.

"If the exercises go ahead as scheduled, North Korea's protest will be a little stronger, whereas if the exercises are put on hold altogether, it could be seen as a new message," he said.

North Korea has long denounced joint military drills between the U.S. and the South as a rehearsal for invasion. When and how to stage the annual summertime exercises have drawn keen attention as they could throw cold water on already chilled inter-Korean relations.

Lee, known for pro-unification activism during his college years when he served as the inaugural leader of a nationwide university students' association, also said he believes it is right for the U.S. to continue to station troops in the South.

Lee said the American troop presence is necessary in the context of power balance in Northeast Asia. 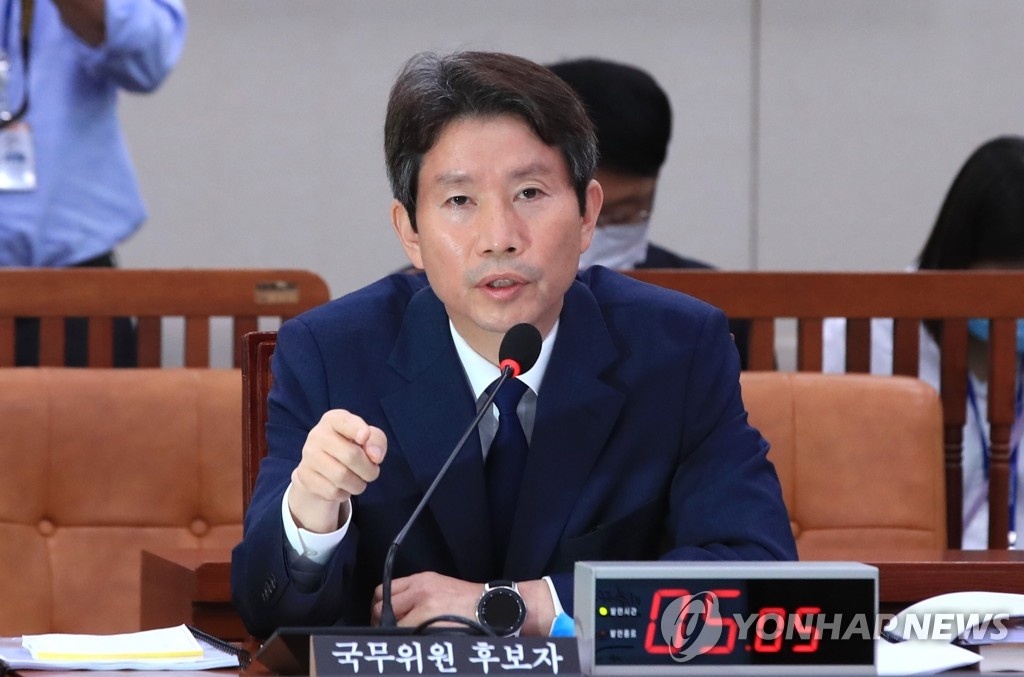 Inter-Korean relations have been deadlocked since the no-deal summit between U.S. President Donald Trump and North Korean leader Kim Jong-un in February last year. Pyongyang has not responded to Seoul's offer for exchanges and talks ever since.

The North also cut off all cross-border communication lines and threatened to take more retaliatory steps, but leader Kim later called off military action against the South.

With regard to the issue of the withdrawal of U.S. troops stationed in South Korea, Lee said that it is necessary to maintain their presence here from the perspectives of "strategic balance of power" in the region and alliance between Seoul and Washington.

A recent news report said that the Pentagon had presented the White House with options to reduce troop levels in South Korea in March. Speculation of a possible drawdown has increased as the U.S. has demanded South Korea pay significantly more to keep the 28,500 troops stationed there.

Lee stressed that inter-Korean relations should move forward regardless of progress in denuclearization talks between North Korea and the U.S., vowing to push for a "bold change" in Seoul's approach to North Korea if he takes office.

"The South and the North should sit face-to-face again. Reaffirming their mutual trust and making good on promises, they have to restart the stopped Korean Peninsula clock," he added. "We will take the lead and push for a bold change to turn the North Korea-U.S. clock into the clock for the South and the North."

He, in particular, called for cross-border cooperation in the humanitarian area, saying issues related to "eating, suffering and things that people want to see before they die" should be handled independently of political issues.

If necessary to help break the logjam in relations with the North, Lee also said that he would not hesitate at all to go to Pyongyang as a special envoy.

"I would like to resume talks, among other things," he said.

He, however, dismissed calls for disbandment of the working group forum set up in September 2018 to coordinate North Korea policy with the U.S. Critics here and North Korea have denounced it as a major hindrance to expanding inter-Korean exchanges as it focuses only on enforcement of global sanctions on the North.

"We cannot completely deny the function that the working group has played in effectively resolving matters related to sanctions against the North," he said.

Lee, a four-term lawmaker, was appointed as unification minister earlier this month to replace Kim Yeon-chul, who resigned over recently strained inter-Korean relations.

He must go through a parliamentary confirmation hearing, but it is considered largely a formality as the National Assembly can only express its views on the nomination without the power to reject it.