SEOUL, July 23 (Yonhap) -- A 19th-century Buddhist painting, which was believed to have been shipped out of the country during the 1950-53 Korean War, has been brought back home from Britain, a Buddhist sect said Thursday.

The Jogye Order of Korean Buddhism said a ceremony was held at the Memorial Hall of Korean Buddhist History and Culture in downtown Seoul to celebrate the return of the Assembly of Tejaprabha Buddha.

The painting arrived here from Britain on June 28 and will be sent to its original owner, Songgwang Temple in Suncheon, about 415 kilometers south of Seoul. 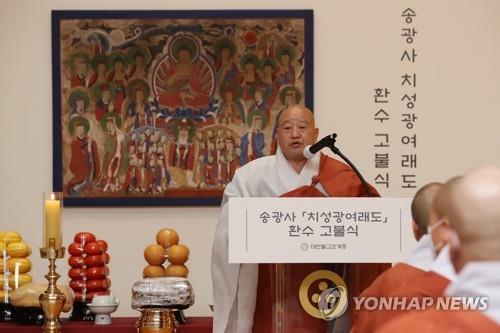 It is believed that the painting was produced by the Suncheon temple in 1898.

The silk painting, measuring 141 centimeters in width and 102 cm in length, features a radiant seated figure of the Buddha flanked by standing Buddhist saints symbolizing the sun and the moon.

The Jogye order said the restoration of the precious Buddhist painting was made possible by earnest efforts by the Overseas Korean Cultural Heritage Foundation and Songgwang Temple.

It said the cultural heritage foundation discovered last month that the Assembly of Tejaprabha Buddha was put up for auction abroad and passed the information over to the Jogye order.

It is difficult to specify when and how the painting was taken out of the Suncheon temple but the Jogye order speculates that its offshore shipment may have taken place during the Korean War.