In the phone talks between Foreign Minister Kang Kyung-wha and her Vietnamese counterpart, Pham Binh Minh, Kang called for stepped-up cooperation in establishing a "fast-entry" system to allow regular entry by businesspeople in exception to the entry curbs.

Minh, in response, promised his full support in adopting the entry exception into a system within the confines of virus control measures and suggested discussing the matter in detail through future working-level talks.

The Vietnamese minister also noted his government's push for resumption of regular flight operations to and from several countries, including South Korea, which Kang hailed as a move toward normalizing people-to-people exchanges.

During the talks, they also assessed containment efforts against COVID-19 in each other's countries and agreed that bilateral cooperation to that end, including the special entries into Vietnam so far approved for some 5,000 South Korean businesspeople, has played out successfully.

They also agreed to work together to swiftly resume top-level diplomatic exchanges and enhance cooperation in various sectors so as to minimize economic fallout from the virus outbreak, according to Kang's office.

As of 2019, Vietnam was South Korea's fourth-largest trading partner after China, the U.S. and Japan, with the trade volume reaching US$69.2 billion. 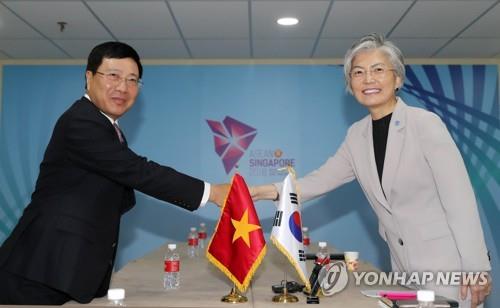