BUSAN, July 24 (Yonhap) -- Two people died after being trapped inside a flooded underpass in this southern port city of Busan, firefighters said Friday.

As heavy rain pounded the city, the 3.5-meter-high underpass was flooded by 10:18 p.m. Thursday, with the water level reaching the 2.5-meter mark.

With vehicles trapped inside, firefighters rescued eight people and sent them to the hospital, but two of them, identified as a man apparently in his 60s and a woman in her 30s, died.

Rescue operations were also under way in other parts of the city.

As of midnight, a total of two people had been killed and 32 rescued amid the downpour, firefighters said.

The Korea Meteorological Administration has issued heavy rain warnings for many parts of the country, including Seoul and Busan. 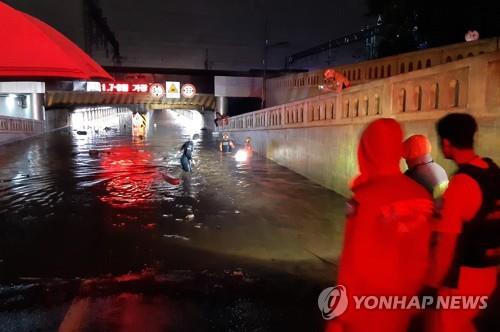