The Central Disaster Management Headquarters said three people were found dead in their cars Thursday night, submerged in rain water in an underpass in the southern port city of Busan. One man was reported missing after being swept away by a flooded stream in Ulsan, northeast of Busan.

Nationwide, some 195 people were evacuated to safety and at least 51 people were rescued, according to the national disaster management center. 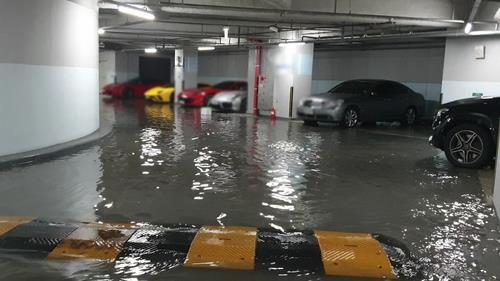 In Busan, the country's second-biggest city, torrential rains of up to 80 millimeters per hour unleashed chaos, sending mudslides into construction sites and turning subway stations into indoor showers.

According to the national weather agency, the city's hourly precipitation on Thursday recorded the 10th highest since 1920.

In Busan, 162 cases of flooded homes were reported, the most in the country, where 43 roads were also submerged, temporarily trapping people in their vehicles.

The building's underground parking lots and entrance fell into a state of chaos, as residents rushed to move their cars overground, they said. All of the building's six elevators also broke down amid the heavy rain.

A heavy rain advisory was also issued in the industrial city of Ulsan, home to Hyundai Motor's main domestic plants.

Downpours of 215.5 mm pummeled the city, triggering mudslides and flash floods that swallowed sidewalks and the pedestrian paths along Yeocheon Stream in southern Ulsan. A total of 44 damage reports were filed at the Ulsan Fire Station. 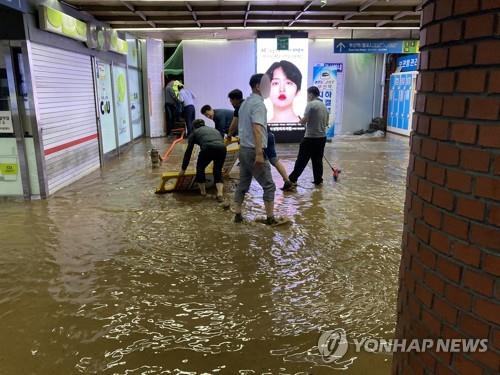 In the capital Seoul, some parts of intercity highways were closed due to rising waters. But damage otherwise was minimal. In Gwangju, Gapyeong and Paju of Gyeonggi Province, heavy downpours temporarily caused power outages at 1,100 households.

Heavy rain advisories are still in effect in parts of the country, including the provinces of Gangwon and North Gyeongsang, where more rainfall up to 50 mm is forecast to continue. But showers will stop for the capital area -- Seoul, Incheon and Gyeonggi Province -- during the day on Friday. 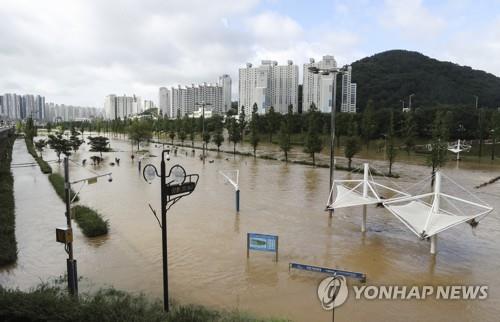 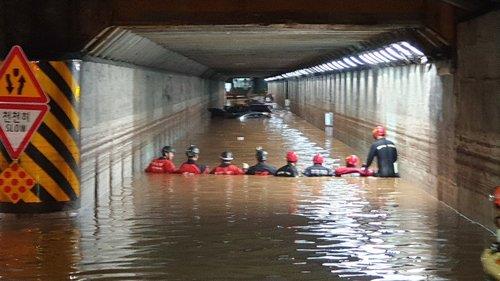