SEOUL, July 24 (Yonhap) -- After five years in the big leagues, he now plays for a team named the Heroes, and he says his favorite superhero character is Superman.

And the former major league All-Star Addison Russell is ready to be a hero for his new club in South Korea, a Superman-type player who can come to his team's rescue whenever possible.

Russell was formally introduced as the newest member of the Kiwoom Heroes in the Korea Baseball Organization (KBO) on Friday. He signed for US$530,000 for the rest of the season near the end of June and arrived in South Korea earlier this month. He served his mandatory 14-day quarantine, required for all international arrivals, and joined his new teammates for his first practice at Gocheok Sky Dome in Seoul. 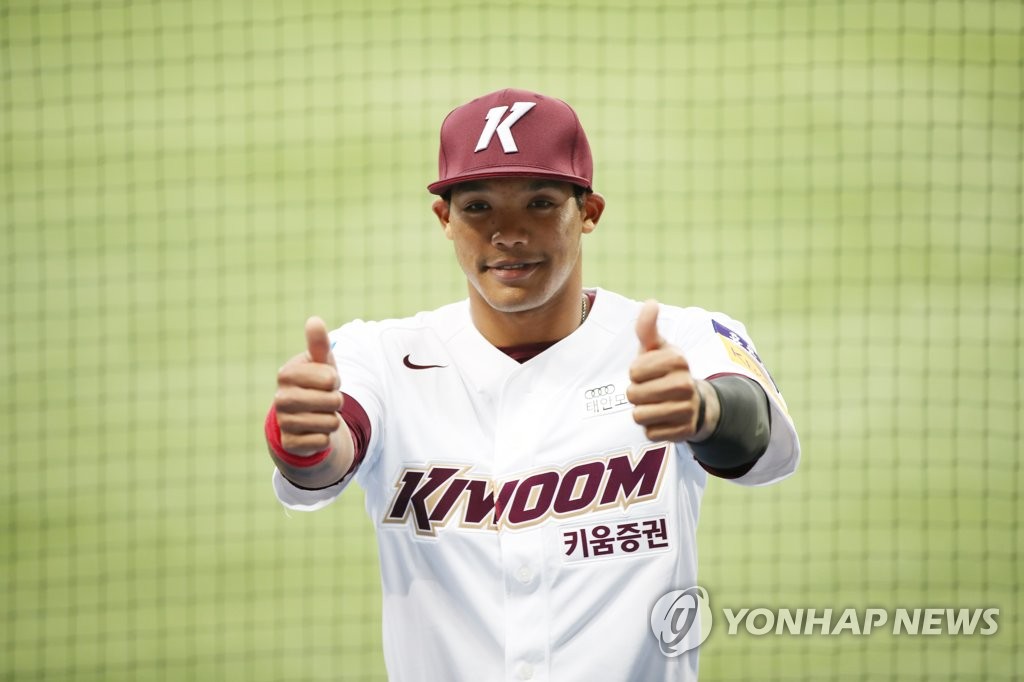 He will not be available to play the Lotte Giants right away Friday but could be in the lineup by as early as Sunday for the final game of the three-game set.

"I really enjoyed meeting my teammates. They seemed like a great group of guys," Russell said in his press conference at the dome. "Anticipation between now and playing on the field with them is a lot."

Russell, 26, brings a solid resume to the KBO. Playing for the Chicago Cubs, Russell was named to the National League All-Star team in 2016, a season in which he established career highs of 21 home runs and 95 RBIs. He also helped the Cubs win the World Series that same year and was named one of three finalists for Gold Glove at shortstop.

Asked if he has set any statistical goal for himself, Russell said he wants to accomplish things that go beyond numbers.

"Just go out there and compete, and push my teammates in a positive way so we can come out with a win," Russell said. 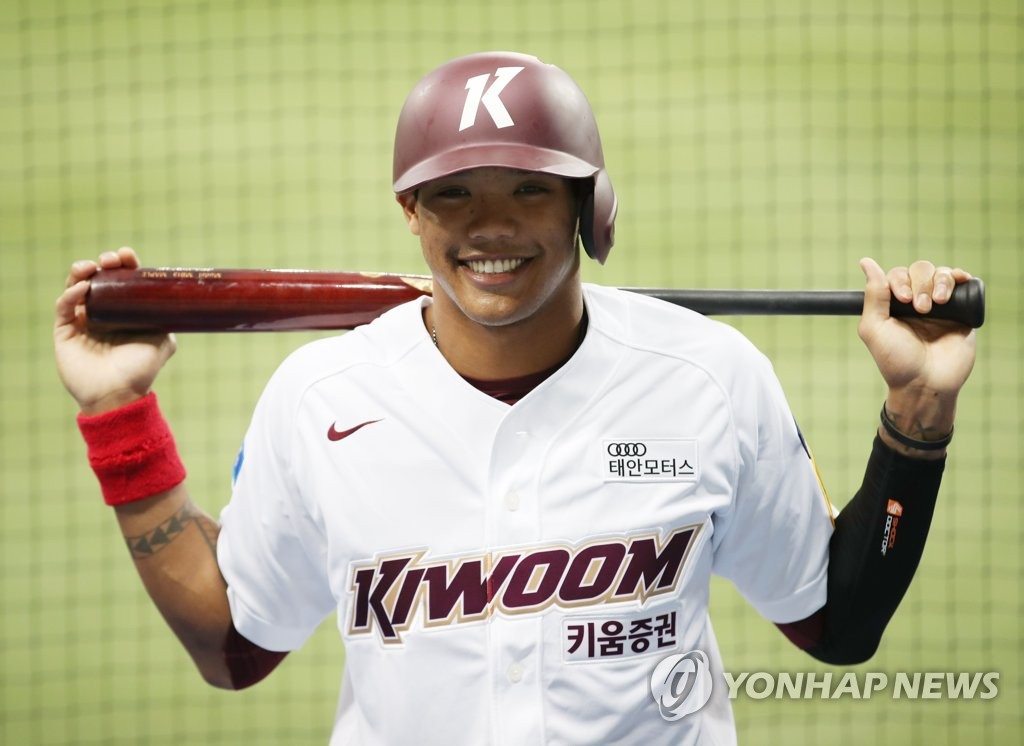 Russell is expected to bat in the heart of the order already stacked with All-Star, MVP-caliber hitters. He mostly batted in the bottom half of the lineup in the majors, but he said he's going to embrace added responsibilities as the potential cleanup hitter for the Heroes.

"I am very confident in my approach, especially with runners in scoring position," he said. "I am not afraid to take the count deep and walk as well, so I can pass the bat to five-hole hitter or the guy behind me, and let him work, too."

Russell played only shortstop (460 games) and second base (149 games) in the majors, and the Heroes are set at second base with former MVP Seo Geon-chang and at shortstop with perennial All-Star Kim Ha-seong. Manager Son Hyuk has hinted that he will put Russell in his natural position at shortstop and move other pieces around the infield.

For his part, Russell said he's "really comfortable" at shortstop but he can also handle second base.

During his 14-day quarantine in Yangpyeong, about 55 kilometers east of Seoul, Russell stayed sharp hitting against a pitching machine inside the batting cage that the Heroes set up. He also watched plenty of KBO action and came away impressed. 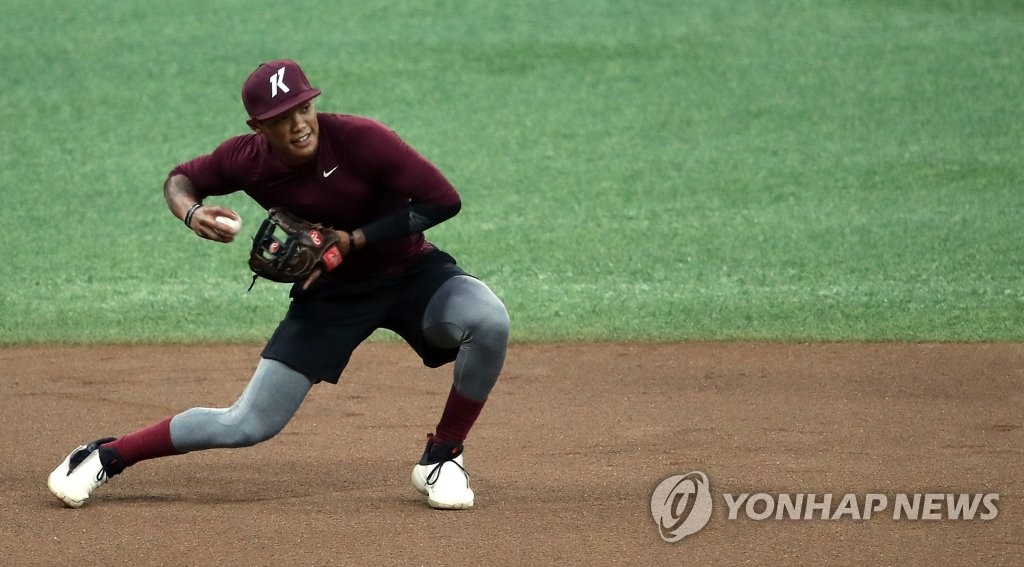 "It looks like a fun league, a league which I can't wait to play in," he said. "The style overall ... is very similar to American baseball. But there are more sidearm pitchers (here) than in the major leagues, which is going to be an adjustment that I have to get used to and master."

"We played baseball together," Russell said succinctly, when asked why he wanted to go up against the right-hander. 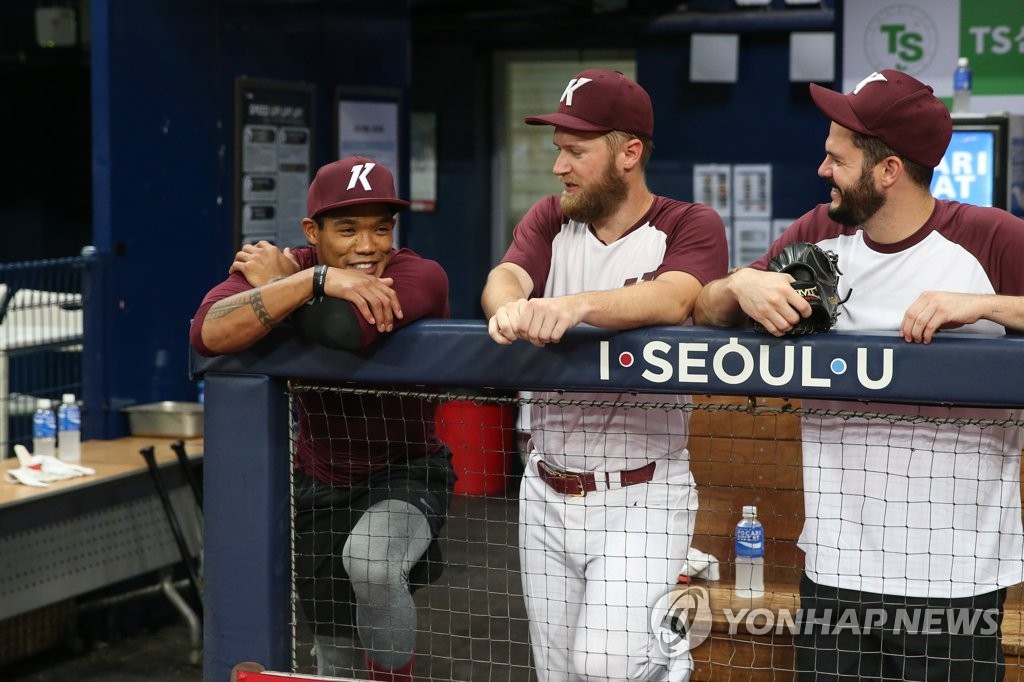 They did more than just play together. Russell and Straily were traded, along with outfielder Billy McKinney, by the Oakland Athletics to the Cubs in July 2014.

As an unrestricted free agent after the Cubs didn't tender him a contract following the 2019 season, Russell was unable to find a new landing spot in time for spring training. Then the coronavirus hit and brought big league camps to a halt. Along the way, Russell hasn't seen much baseball action.

He tried to downplay concerns about rust.

"This offseason, I've been training really hard to get my body in peak form," he said. "I have to use my mental skill to envision myself playing out there."