SEOUL, July 25 (Yonhap) -- Undone by a shaky fifth inning, Ryu Hyun-jin of the Toronto Blue Jays came up an out shy of qualifying for a victory in his second straight Opening Day assignment.

The South Korean left-hander was charged with three earned runs in 4 2/3 innings against the Tampa Bay Rays at Tropicana Field in St. Petersburg, Florida, on Friday (local time). He left with two outs in the fifth and the Jays leading 6-3 with a man at second base. Reliever Jordan Romano walked the first batter he faced but struck out Brandon Lowe to end the threat.

The Blue Jays hung on for a 6-4 win, with the Rays going 1-for-10 with runners in scoring position.

The Jays had just spotted him a 6-1 lead in the top fifth, and Ryu got two quick groundouts in the bottom fifth. 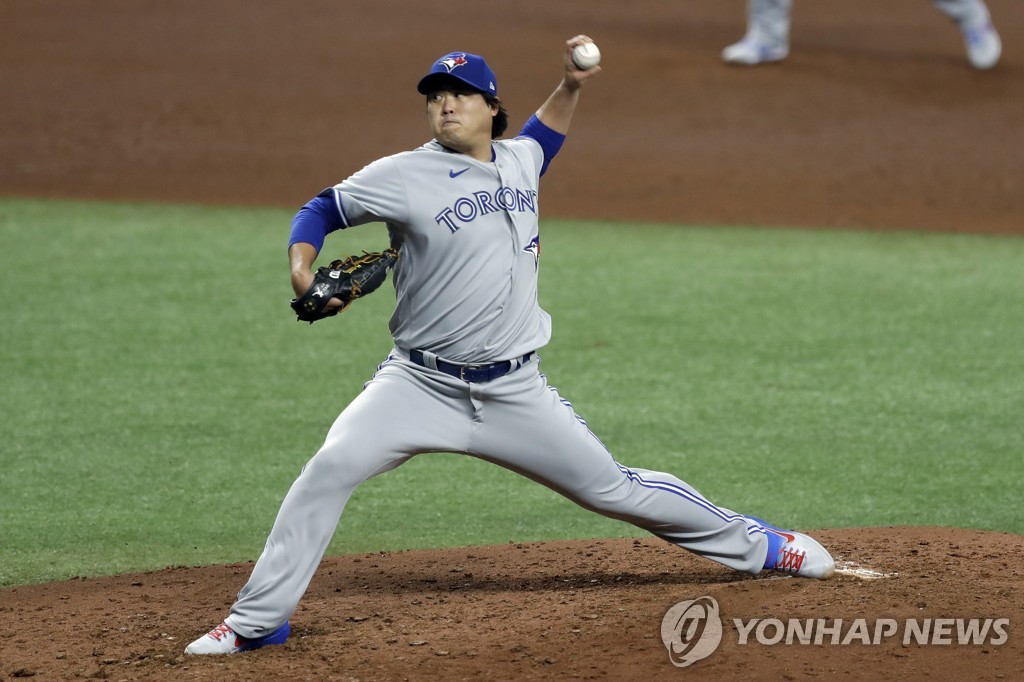 Seemingly on his way to completing the fifth, Ryu walked Hunter Renfroe on six pitches. Ryu then got the full count on Yoshi Tsutsugo before giving up a two-run homer to left-center field.

That cut the lead to 6-3, and Ryu's night was done after Jose Martinez's double to left.

Ryu gave up four hits, all of them of the extra-base variety, and walked three batters. That's an uncharacteristically high number of free passes for the control artist, who only issued 24 walks in 182 2/3 innings last year.

Ryu, 33, was making his Blue Jays debut after inking a four-year, US$80 million contract as a free agent last December. He'd spent the past seven years with the Los Angeles Dodgers. He was also their Opening Day starter in 2019, a year in which he led the majors with a 2.32 ERA and finished second in the National League Cy Young Award voting.

Ryu came into the truncated, 60-game season as the undisputed No. 1 starter in the revamped Toronto rotation.

Despite the delayed start to the season, caused by the coronavirus pandemic, and disruptions to his preseason prep, Ryu looked to be in midseason form early. He retired the first six batters he faced, three of them via groundballs.

Ryu then wiggled out of a mini jam in the bottom third. A leadoff double and a two-out walk put runners at the corners for Renfroe. On a 2-2 count, Ryu got him to fan on a changeup on the outside corner.

And then the Blue Jays gave Ryu a 3-0 lead in the top of the fourth. 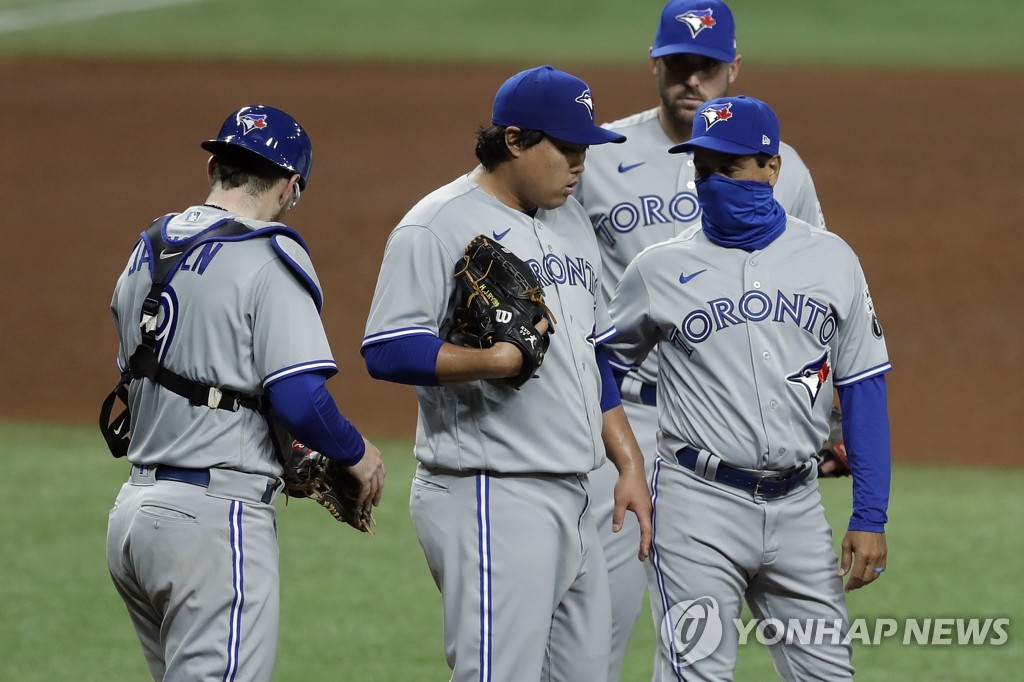 They loaded the bases with Cavan Biggio's bunt single, Vladimir Guerrero Jr.'s single and Travis Shaw's walk. Randal Grichuk knocked in the first run with a single to left, and then back-to-back sacrifice flies by Rowdy Tellez and Teoscar Hernandez put the Blue Jays up 3-0.

Ryu gave a run back in the bottom fourth. With two outs and a runner at first, Mike Brosseau drove a double to the right-center gap, and Manuel Margot scored all the way from first to cut the Rays' deficit to 3-1.

The Blue Jays' offense came through for Ryu once again in the top fifth. Danny Jansen and Bo Bichette had consecutive singles to open things up, and Biggio smacked a three-run homer to right field to extend the lead to 6-1 and chase starter Charlie Morton.

Ryu couldn't capitalize on that five-run cushion, though, as he suddenly lost the command of his changeup, his usual bread-and-butter pitch.

After two perfect innings to start the game, Ryu allowed at least a baserunner in each of the next three.

Choi pinch-hit for No. 9 hitter Mike Zunino with one out and two runners on in the eighth inning, and he drew a walk to load the bases. Choi stayed in the game as the first baseman and didn't get another plate appearance.