Three of the five stadiums opened their gates in the Korea Baseball Organization (KBO): the Doosan Bears hosting the LG Twins at Jamsil Baseball Stadium in Seoul; the Kiwoom Heroes playing the Lotte Giants at home at Gocheok Sky Dome, also in the capital; and the KT Wiz bringing the NC Dinos to KT Wiz Park in Suwon, 45 kilometers south of Seoul. 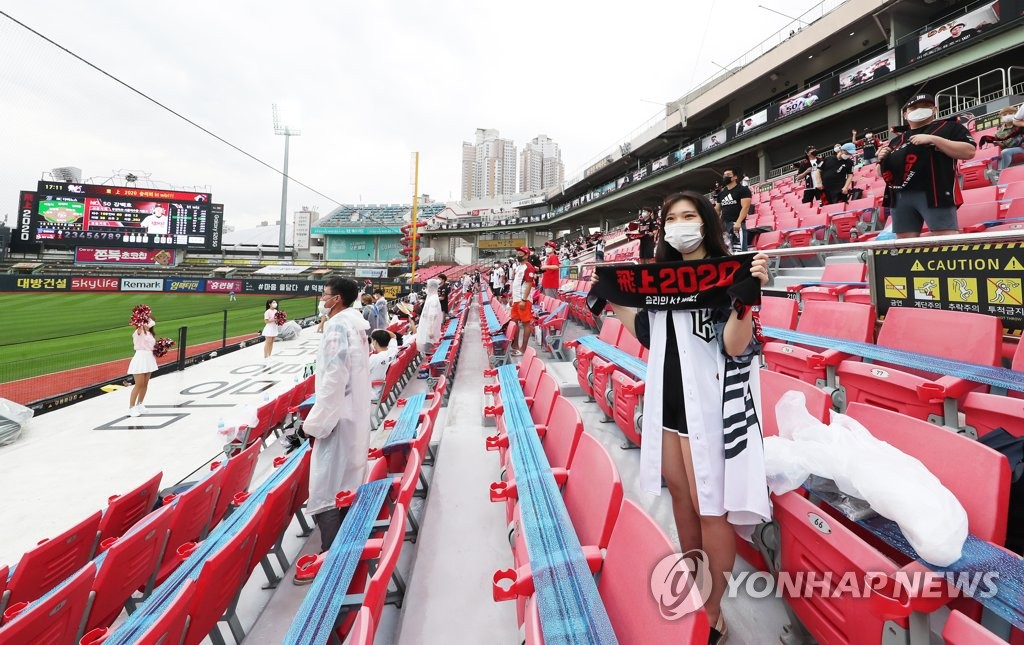 Two remaining games were played in cities that remain under strict social distancing guidelines and thus were not allowed to welcome back fans: the Samsung Lions against the Kia Tigers at Gwangju-Kia Champions Field in Gwangju, 330 kilometers south of Seoul; and the SK Wyverns visiting the Hanwha Eagles at Hanwha Life Eagles Park in Daejeon, 160 kilometers south of the capital.

The KBO season opened May 5, instead of the originally-scheduled March 28, because of the coronavirus outbreak. And to help mitigate COVID-19 infection risks, the league's 10 teams have been playing in front of empty seats since Opening Day.

On Friday, the government gave its green light on sports teams to open stadium gates to spectators. It had first announced near the end of June that teams would be allowed to bring fans back, but then waited almost another month before giving its final stamp of approval because of a spike in COVID-19 cases. 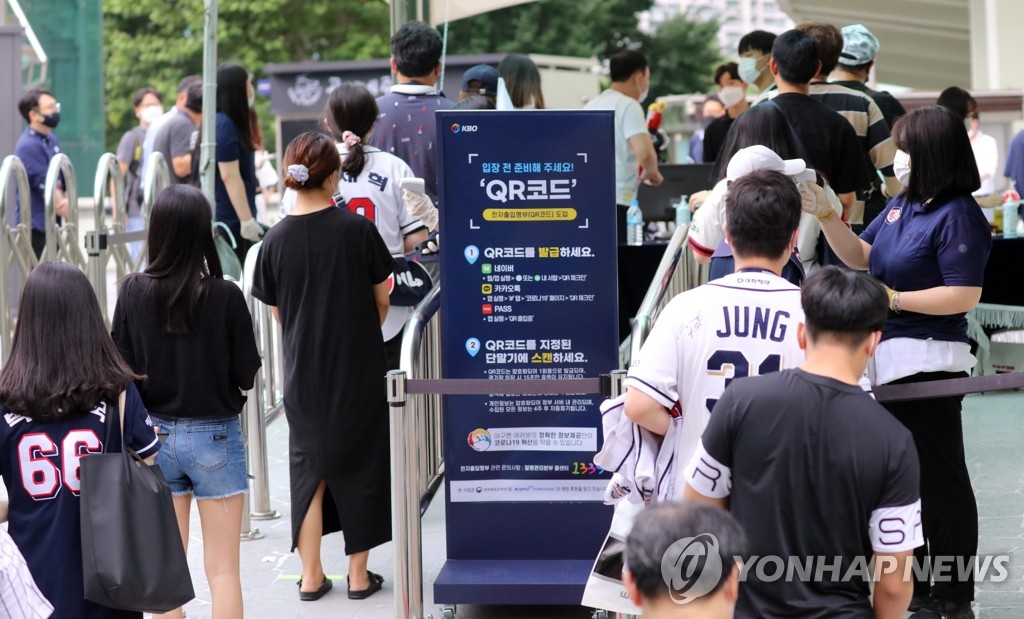 Any excitement over the opening of the ballparks was tempered by restrictions. The government ordered KBO teams to cap the crowd at 10 percent of the capacity at their stadiums, meaning no club would have more than 2,500 fans in the early phase of reopening. The league had been hoping the limit would be set at around 30 percent.

The Twins-Bears game sold all 2,424 tickets, and the Giants-Heroes game was also a sellout, with 1,647 tickets gone.

About three hours before 5 p.m. first pitch in Suwon, about 200 of 2,000 tickets were still available. 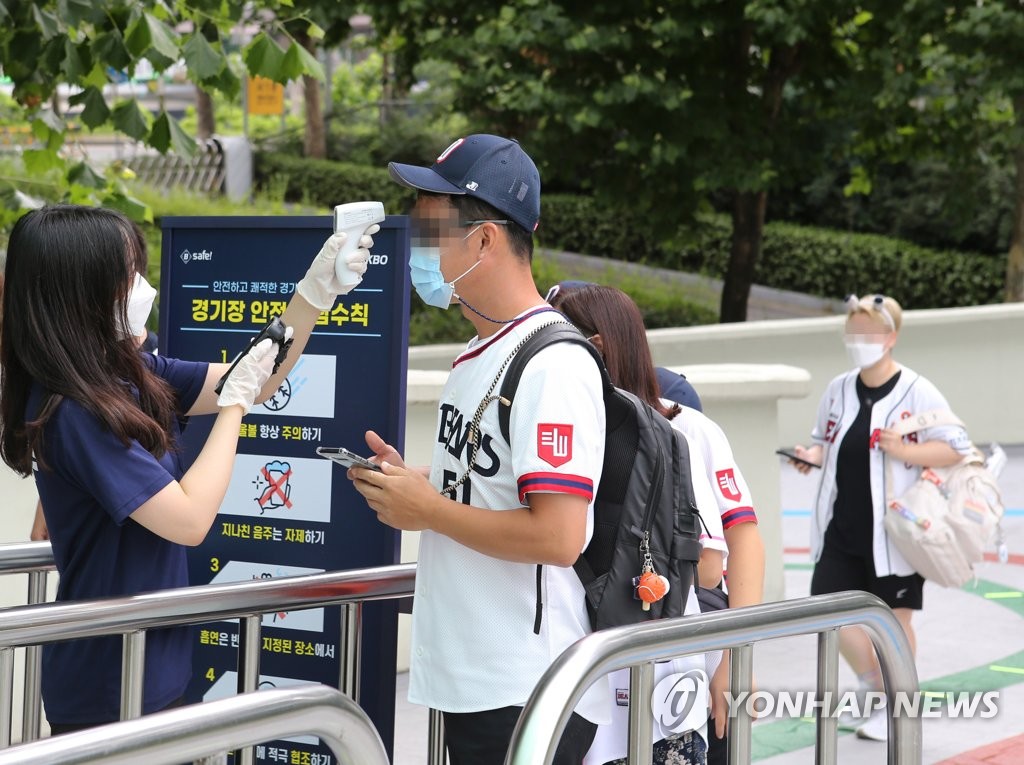 In Daejeon, the intensive social distancing campaign ends Sunday. The Eagles will play the Wyverns on Monday in a makeup game of a rained-out matchup from Saturday, and will be able to sell up to 1,300 tickets for that game.

Fans will have to adhere to strict health and safety protocols. They must wear masks at all times and must go through temperature checks upon entry. They must provide their personal contact information as they enter stadiums, either by scanning quick response (QR) code or writing down names and phone numbers.

All tickets must be purchased in advance with credit cards, a measure designed to limit person-to-person contact at box offices and to expedite contact tracing in case of positive tests.

Once in the stands, fans must sit apart from one another, even when they're attending in a group, and they'll be prohibited from eating or drinking alcoholic beverages from their seats. Food may only be consumed in designated concession areas. Loud chanting and singing by fans will also be prohibited. 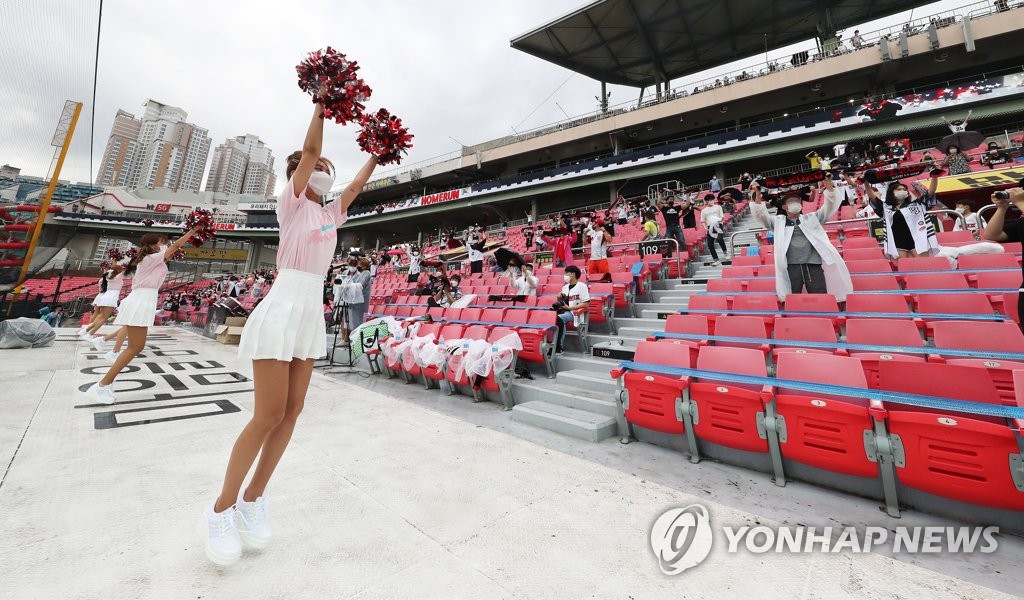 Despite all that they couldn't do, fans who attended Sunday's games focused on what they could do -- watch baseball in person.

Park Jae-sool, a 50-year-old Twins fan who visited Jamsil with his 13-year-old son, Hyun-jin, said he felt lucky to have bought tickets for Sunday's game.

"I went to more than 30 games last year, and it's not been any fun this year because we weren't allowed to come until today," he said.

Hwang Young-il, who came to KT Wiz Park wearing the jersey of rookie Wiz pitcher So Hyeong-jun, said, "This is our Opening Day today."

"I attended every home game last year and went to a few road games, too," said Hwang, who's been a fan since the Wiz's founding in 2015. "I wasn't going to miss this game."

Ryu Si-hyun, a nine-year-old fan of the Wiz, said she felt "a little strange" having to sit apart from her parents, but she understood why she had to do so.

"We've all been waiting for so long to get into baseball games, and I think we have to follow these rules," she said. "I am looking forward to enjoying my first game of the season."

Managers in action on Sunday said they were excited to have fans back in the stands.

"It's great to see them again, and I think our players will be able to compete even harder and focus better," Twins' manager Ryu Joong-il said.

The Wiz reached .500 in winning percentage on Saturday, and their manager Lee Kang-chul said, "Now that we're at .500 again, today feels like a fresh start to the season."

Without any gate revenue, KBO teams have been experiencing serious financial issues, with some claiming they would need to take out bank loans just to pay salaries for players and employees. Despite the cap on the crowd, 10 percent of the capacity is still better than zero and a welcome relief for clubs.

Unlike in Major League Baseball (MLB), which has shortened its schedule from 162 games to 60 games and whose players will earn prorated salaries, the KBO is sticking to the full, 144-game calendar, with no pay cuts for players. 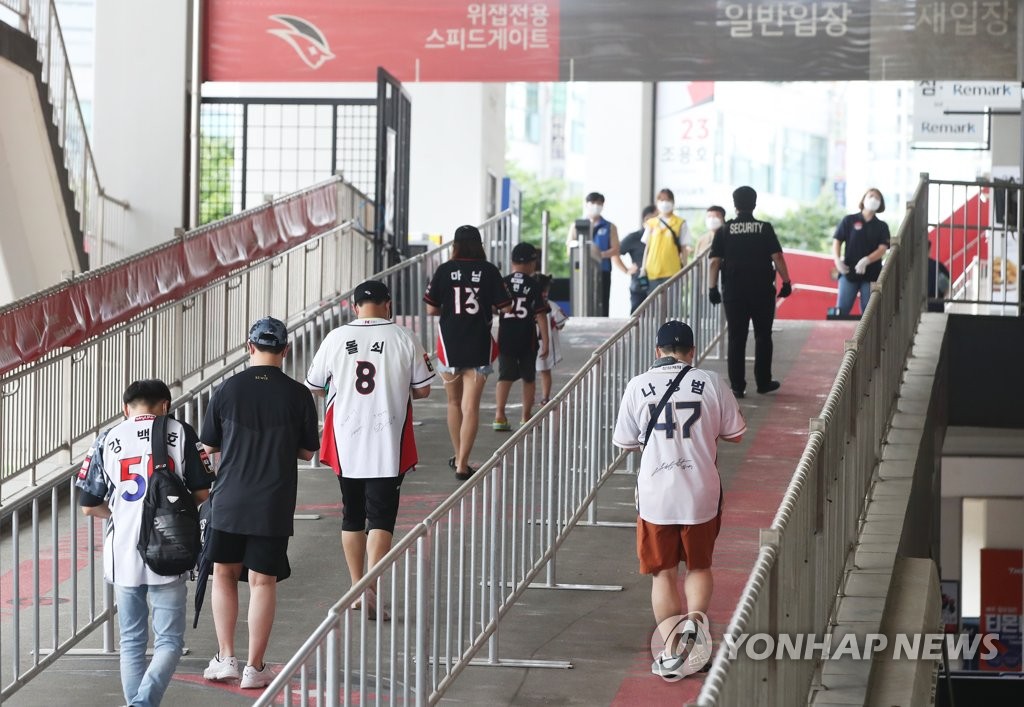 (LEAD) Look who's back: Fans return to KBO games during pandemic

(LEAD) Look who's back: Fans return to KBO games during pandemic