SEOUL, July 27 (Yonhap) -- HDC Hyundai Development Co., a major property developer, appears to be leaning toward scrapping its plan to acquire Asiana Airlines Inc. as it demanded another round of due diligence on the carrier amid the new coronavirus outbreak, industry sources said Monday.

HDC said Sunday it has sent a letter to Kumho Industrial Co., which owns a 30.77 percent stake in Asiana Airlines, to demand the additional due diligence on the country's second-biggest carrier.

"In the letter, we proposed (additional) due diligence on Asiana Airlines and its affiliates for 12 weeks from mid-August in order to review the acquisition terms amid worsening business environments due to the pandemic," a company official said over the phone. 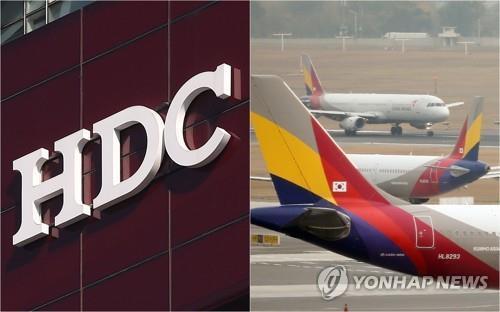 The proposal comes one month after HDC called for renegotiations with Asiana creditors over the acquisition terms, describing the ongoing virus crisis as a "never expected and very negative factor" that will affect its planned takeover of the debt-ridden carrier.

"We have requested review of the acquisition terms several times but Kumho Industrial and Asiana Airlines have continued to demand the deal's completion without listening to our request," the HDC official said.

In response to HDC's request, Asiana said it has made all-out efforts to help complete the M&A deal and will continue to carry out what is necessary to finalize the deal.

Asiana said Kumho Industrial on July 14 sent a letter demanding HDC to complete the deal by the end of August. HDC didn't confirm the notification.

The tit-for-tat between the two sides comes amid reports that Kumho Industrial could notify HDC of the deal's termination and that Asiana has formed a task force team in case of the deal's collapse.

In December, the HDC-Mirae Asset Daewoo consortium signed the deal to acquire the carrier from Kumho Industrial, a construction unit of Kumho Asiana Group, as well as new Asiana shares to be issued and Asiana's six affiliates, for 2.5 trillion won (US$2.2 billion) with a plan to complete the acquisition by June 27.

HDC has obtained all necessary approval from regulators in the United States, China, Kazakhstan, Uzbekistan, Turkey, Russia and South Korea.

But the major stumbling block to the deal for now appears to be the COVID-19 pandemic's growing impact the airline industry.

To help Asiana stay afloat, the Korea Development Bank and the Export-Import Bank of Korea plan to inject a combined 1.7 trillion won into Asiana. Last year, the two state lenders already extended a total of 1.6 trillion won to the carrier.

As for the possibility of the deal's collapse, HDC said it "remains committed to acquiring Asiana in order to help strengthen the competitiveness of the local airline industry."

In spite of HDC's reaffirming its takeover plan, the deal is widely expected to follow in the footsteps of a recent deal collapse between two low-cost carriers due mainly to the virus impact.

(LEAD) HDC appears to be on path to scrap Asiana deal

(LEAD) HDC appears to be on path to scrap Asiana deal