SEOUL, July 27 (Yonhap) -- A cultural festival showcasing a wide range of traditional heritages of South Korea's southeastern province of North Gyeongsang will kick off this week for a monthlong run across three cities, organizers said Monday.

The 2020 World Heritage Festival Gyeongbuk will be held from Friday until Aug. 30 in the cities of Andong, Gyeongju and Yeongju in the province of North Gyeongsang, the Cultural Heritage Administration (CHA) said.

The inaugural festival is co-organized with the local provincial government to promote the rich cultural heritage, including music, dance and clothing, and Confucian and Buddhist philosophies developed and spawned from the region.

The monthlong festival will offer a wide range of exhibits, concerts and experiences themed around cultural legacies in the province. Andong, 270 kilometers southeast of Seoul, will feature a concert that reinterprets Confucian philosopher Yi Hwang's "12 Songs of Dosan" and a concert showcasing a modern reinterpretation of the traditional Hahoe Byeolsin Mask Dance performance.

A media art exhibition on renowned Confucian auditoriums and mountain temples in the province will also be held in the UNESCO-listed Andong Hahoe Folk Village.

Gyeongju, 370 kilometers southeast of Seoul, will host a media art exhibition showcasing the Seokguram Grotto recreated through 3D visuals and a fashion show on traditional clothing made with locally produced textiles.

A dance drama production inspired by Buddhist philosophy will be staged in Yeongju, 230 kilometers southeast of Seoul, during the festival's run.

As part of measures against the spread of the new coronavirus, visitors will be required to wear masks and adhere to social distancing guidelines. CHA said it has started accepting reservations for the events. 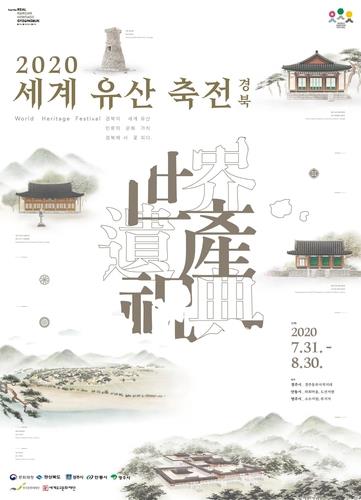