SEOUL, July 27 (Yonhap) -- President Moon Jae-in said Monday the government will use every available policy means to pull off a prompt economic recovery, calling the third quarter of this year a crucial period.

He noted that Asia's fourth-largest economy posted negative growth for the past two consecutive quarters due to the fallout of the COVID-19 pandemic, which means the economy has fallen into a recession, although Moon did not use that term publicly.

"Seeing the third quarter as an opportunity that can't be missed, the government will mobilize various policy measures on an emergency footing," the president said, speaking in front of pool reporters at the outset of a weekly meeting with his senior Cheong Wa Dae aides. 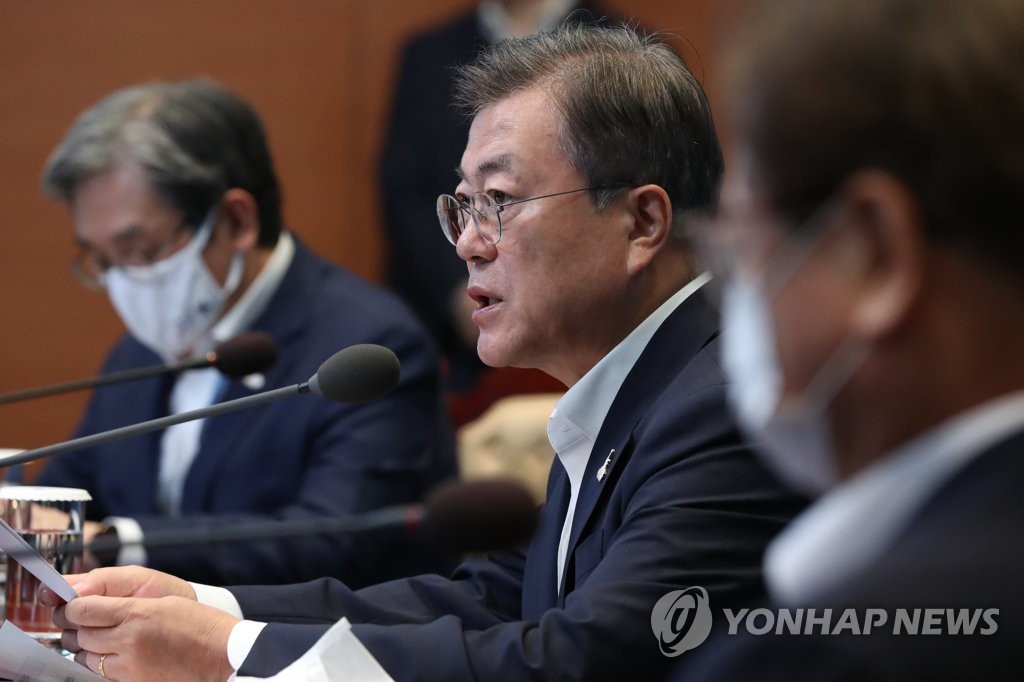 As South Korea's economy has fared relatively well in comparison with other major ones amid the coronavirus crisis, he emphasized, it's time to concentrate all efforts to get out of the "dark tunnel of reverse growth" and have the economy bounce back.

He struck an upbeat outlook, pointing to data from June and July that suggest a gradual improvement, especially in domestic demand, a pillar of the nation's economy along with exports.

"The government predicts that the economy will be able to rebound beginning in the third quarter if the government and the private sector join efforts," Moon said.

The country's economy contracted 3.3 percent during the April-June period from the previous quarter, the steepest decline since the 1998 financial crisis, according to the Bank of Korea. It was mainly attributable to declines in exports.

Moon said exports have been showing signs of recovery this month. He also expects positive effects from the so-called Korean-version New Deal, which he says is aimed at transforming South Korea into an "inclusive state with a pacesetting, low-carbon economy."

"The government will do its best to protect the lives and safety of our nationals wherever they are," he said.

Moon instructed the authorities to pay attention to the health of around 12,000 construction workers in foreign countries through telemedicine and other methods.

"I can confidently say that South Korea is front-running in the world in protecting its nationals abroad," not just having become a model in the anti-virus fight, he added.