SEOUL, July 28 (Yonhap) -- SK Group has cemented its status as the No. 2 market-cap conglomerate in South Korea on a surge in prices of shares in its recently listed biopharmaceutical unit, a market tracker said Tuesday.

The combined market capitalization of SK's listed subsidiaries came to 120 trillion won (US$100.3 billion) as of Friday, up 136 percent from the end of 2011, according to FnGuide.

SK, also the country's third-largest family-controlled conglomerate, is expected to see its market value make another leap thanks to its bio units as it did after the takeover of SK hynix Inc. in 2012.

The market value of SK hynix has risen nearly three times to 62 trillion won from 13 trillion won over the cited period. 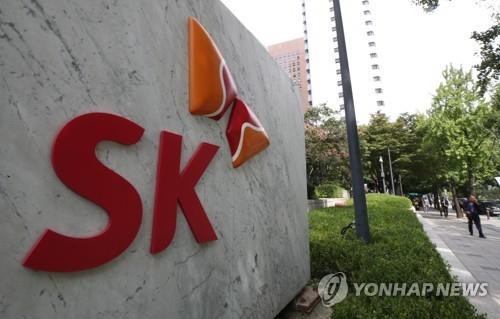 At the vanguard of SK Group's sharp market-cap growth is SK Biopharmaceuticals Co. Ltd., which made its debut on South Korea's main bourse on July 2, becoming the largest initial public offering (IPO) of the year.

As of Monday, SK Biopharmaceuticals' market cap reached as high as 15 trillion won as investors rushed to snap up its shares on news that the company has won approval from the U.S. Food and Drug Administration (FDA) to sell its new drug directly in America.

Vaccine maker SK Bioscience Co., SK's other bio unit, is also drawing attention from investors in the wake of the coronavirus pandemic as it has been trying to develop a vaccine.

In particular, SK Bioscience has gotten a boost from Microsoft co-founder Bill Gates' mention of the company in his recent letter to President Moon Jae-in.

Moon's office quoted Gates as saying that if South Korea's SK Bioscience Co. succeeds in developing a vaccine for the novel coronavirus, the company will be able to produce 200 million vaccines a year starting in June next year.

SK Bioscience has won $3.6 million in research funding from the Bill & Melinda Gates Foundation to develop a COVID-19 vaccine.

Keen market attention is now on how much the market value of SK Bioscience will be when the company is listed on the South Korean stock market.

The company plans to be listed on the Seoul bourse by 2021. On Sunday, it picked NH Investment Securities Co. as the lead manager for its share sale.

Samsung Securities analyst Seo Keun-hee said he puts the corporate value of SK Bioscience at 1.7 trillion won based only on its deal with AstraZeneca. SK Bioscience's corporate value is widely projected to soar once the drug company succeeds in developing a COVID-19 vaccine on its own.

A jump in share prices of SK Biopharmaceuticals and expectations for SK Bioscience have sent shares of its parent companies rocketing as well.

SK Corp., which owns 75 percent of SK Biopharmaceuticals, posted a market value of 16 trillion won as of Monday, more than double that in March.

The market cap of SK Chemicals Co., which has a 98.05 percent stake in SK Bioscience, soared to 3.6 trillion won from just 700 billion won at the end of last year.
(END)