SEOUL, July 28 (Yonhap) -- President Moon Jae-in said Tuesday it's "very meaningful" for the labor, the business and the government to have produced an agreement on a cooperative response to the social and economic fallout of the novel coronavirus crisis.

He admitted, however, that the deal is not flawless, citing a hard-line umbrella union's boycott of the compromise.

He was speaking at a signing ceremony for the accord, which is based on more than 40 days of "social dialogue" among representatives from the three parties. It calls for joint efforts to minimize job cuts, share burdens and expand the social safety net.

The Economic, Social and Labor Council, a presidential panel launched in 2018, put the final touches on the trilateral pact, regarded as largely symbolic with no specific measures stipulated.

Still, it represents the first agreement in 22 years by the three key economic players of South Korea since the 1998 Asiawide financial crisis.

Moon noted that it would have been better with the participation of the Korean Confederation of Trade Unions (KCTU).

"But it's a very meaningful accomplishment, given that each economic player made a one-step concession for that," Moon said during the event held at the council's headquarters in the central Seoul district of Jongno.

The agreement is expected to be of big help to efforts for a prompt economic recovery and a resolution to economic disparity, Moon added.

He pledged that his administration, known for its "inclusive growth" vision, will faithfully implement the deal in respect of the spirit of the three-way pact. He reaffirmed a commitment to plans to introduce the universal employment insurance and sickness and injury benefit system.

The president joined the event to emphasize the importance of social dialogue and win-win cooperation, according to a Cheong Wa Dae official.

His visit to the council's headquarters in the central Seoul district of Jongno was unprecedented.

The panel is designed to explore ways to resolve the problem of social polarization and promote social integration and the balanced development of the national economy.

Other attendees included Kim Dong-myeong, chairman of the Federation of Korean Trade Unions, another major umbrella union; Park Yong-man, head of the Korea Chamber of Commerce and Industry; and Sohn Kyung-shik, chief of the Korea Employers Federation. 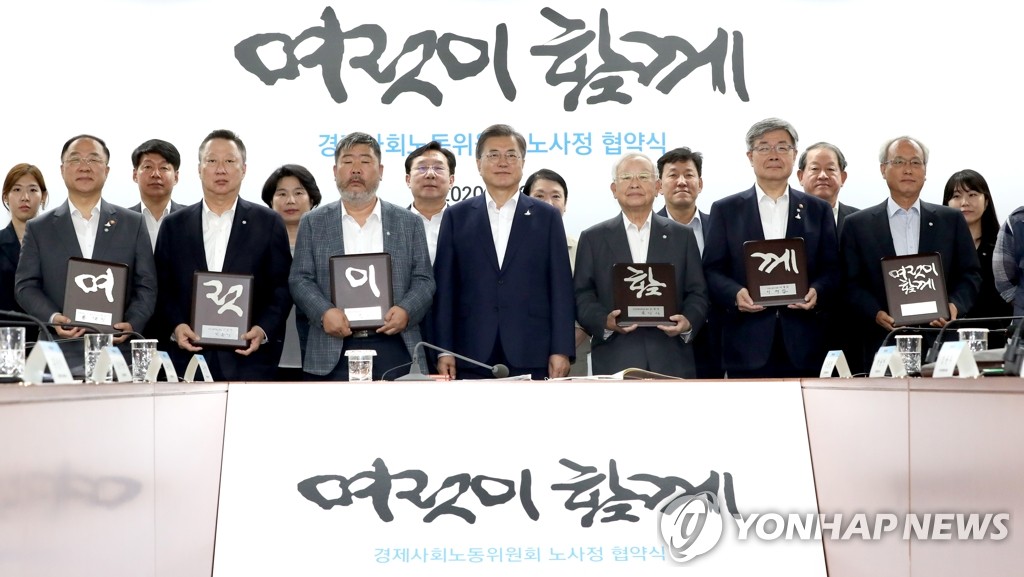