SEOUL, May 28 (Yonhap) -- South Korean stocks rallied by almost 2 percent Tuesday on the back of massive foreign buying with techs and market heavyweights leading the market gain. The Korean won slightly fell against the U.S. dollar.

The market continued a bullish run amid massive stimulus efforts in the United States and Europe.

"A weak U.S. dollar is sparking rebalancing in asset portfolios around the globe," said Seo Sang-young, an analyst at Kiwoom Securities Co. 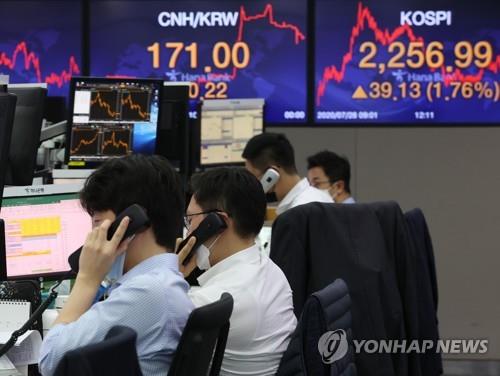 Investor sentiment was further boosted by reports that an experimental COVID-19 vaccine, developed by the National Institutes of Health and Moderna Inc., entered final clinical trials.

A sharp drop in the number of new virus cases in South Korea, as well as a slowdown in daily infections in the U.S., helped buoy the index.

South Korea added 28 new cases Tuesday, up from 25 on Monday but sharply down from a four-month high of 113 on Saturday.

Foreigners bought a net 1.3 trillion won, extending their buying streak to a third consecutive session. The buying spree marks the largest since Sept. 12, 2013, when the comparable figure was 1.43 trillion won.

Market bellwether Samsung Electronics spiked 5.4 percent to 58,600 won on expectations that the company will benefit from the rising tensions between the U.S. and China.

The local currency closed at 1,196.90 won per dollar, down 0.8 won from the previous session's close.