The Korea Automobile Testing & Research Institute (KATRI) of the Korea Transportation Safety Authority is looking into whether the Model 3's Autopilot driver-assist feature has any safety problems, an official at the Ministry of Land, Infrastructure and Transport said over the phone.

"The probe will be focused on the anti-lock brake system and the lane-keeping assist system amid reports that the vehicle may have faulty parts related to its autonomous driving program," the official said.

If the Model 3 turns out to have faulty components, the ministry said it will order the U.S. electric carmaker to recall the model. 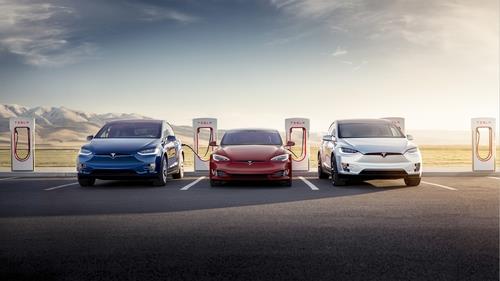 The probe comes after Tesla posted stellar performance in South Korea this year.

Tesla sold a total of 7,079 vehicles in the Korean imported passenger car market from January to June, a whopping increase from just 422 units in the same period of last year.

In June alone, a record 2,827 units of the Model 3 were delivered, sharply up from 121 units a year ago. The spike has been fueled by the popularity of the relatively affordable Model 3.

Among imported carmakers, Tesla ranked fourth in terms of sales last month, following Mercedes-Benz with 7,672 units, BMW's 4,069 and Audi's 3,401, according to the Korea Automobile Importers and Distributors Association.

Since it entered the Korean market in March 2017, Tesla has built about 450 slow-charging stations and 32 superchargers across the country. It takes 10 hours to fully charge a Tesla vehicle with a slow charger, but it takes about an hour with a supercharger.

To further boost sales here, Tesla named a financial expert as country director for South Korea in May.

Kim Kyung-ho, 44, began his term at Tesla Korea on May 12 after serving as vice president at the Korean branch of U.S.-based bank State Street for 7 1/2 years.