WASHINGTON, July 28 (Yonhap) -- U.S. Secretary of State Mike Pompeo has mentioned South Korea as one of America's "democratic friends" that value freedom and economic prosperity under the rule of law, as he criticized China for undermining such values.

Pompeo made the remark Tuesday after he and Defense Secretary Mark Esper held annual "two plus two" ministerial consultations in Washington with their Australian counterparts. China was a key topic in this year's meeting.

"I'm confident that our partners all across Europe, and frankly, democratic friends all across the world, whether it's India, Japan or South Korea, strong partners are here today to understand the challenges of our times is to make sure that the nations do value freedom and do want economic prosperity based on rule of law," he said, when asked by a reporter if the U.S. campaign against China would work.

"This isn't about picking America versus China. This is about choosing freedom and democracy against tyranny and authoritarian regime. And I'm confident that democracies, transatlantic alliance, all of those great nations know precisely which side of that debate they want to be on," he said.

Washington has made emphatic calls for its allies, including Seoul, to join a set of anti-China initiatives it is pushing for to protect Western values and secure stability.

In their joint statement released after the talks, the American and Australian ministers voiced criticism at China over its imposition of a security law on Hong Kong and expressed concerns over Beijing's maritime claims in the South China Sea, calling them "coercive and destabilizing actions."

The statement also cited South Korea as a key partner for commitment to maintaining a secure and prosperous Indo-Pacific region.

"The United States and Australia are working side-by-side, including with ASEAN, India, Japan, the Republic of Korea, and Five Eyes partners, to strengthen our networked structure of alliances and partnerships to maintain a region that is secure, prosperous, inclusive, and rules-based," the statement read. 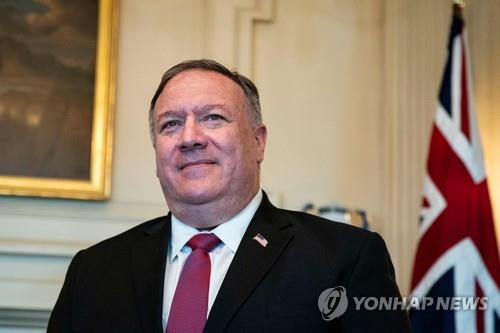