SEOUL, July 29 (Yonhap) -- The United States and Australia have reaffirmed their support for denuclearization negotiations with North Korea and commitment to sanctions against the communist regime's nuclear and missile programs.

The two countries made the pledge after holding "two-plus-two" ministerial consultations between their ministers and secretaries of foreign affairs and defense in Washington on Tuesday (U.S. time).

"The secretaries and ministers affirmed their support for U.S.-DPRK denuclearization negotiations and their commitment to fully implement sanctions against North Korea to counter the threat to security and regional stability posed by North Korea's nuclear and ballistic missile programs," they said in the joint statement released after the talks.

They also called on China to be transparent with the U.S. and Russia on negotiating the terms for limitations on nuclear weapons and other disarmament measures. 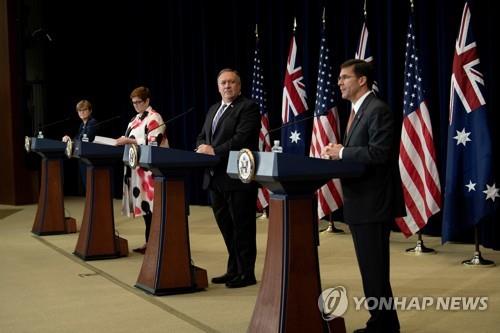