SEOUL, July 30 (Yonhap) -- Surrounded by a stream, a mountain and a bustling street market, Hongeun-dong appears like most Seoul neighborhoods, if not for a mammoth building with an obsolete ivory-colored facade.

Measuring 220 meters in length and 44 meters in width, Yujin Sangga remains one of the city's biggest buildings 50 years after it was built, according to architect Hwang Doo-jin, who has explored modern historic architectures in the South Korean capital.

But the building has more stories to tell than its size.

Once called "Yujin Mansion," old tenants say it once served as a luxury property for elite workers that "held ranking posts in the military or ran big businesses in the city center" when apartments were still rare here.

It's also a legacy of the Cold War built in 1970, a year after then-Seoul Mayor Kim Hyun-ok announced an ambitious plan to turn the city into a "fortress" against North Korean threats.

The building's thick concrete walls and pillars -- there are 100 of them -- contrast with modern day glass and steel buildings and were reportedly part of a design aimed at preventing communist tanks from moving southwards to central Seoul. 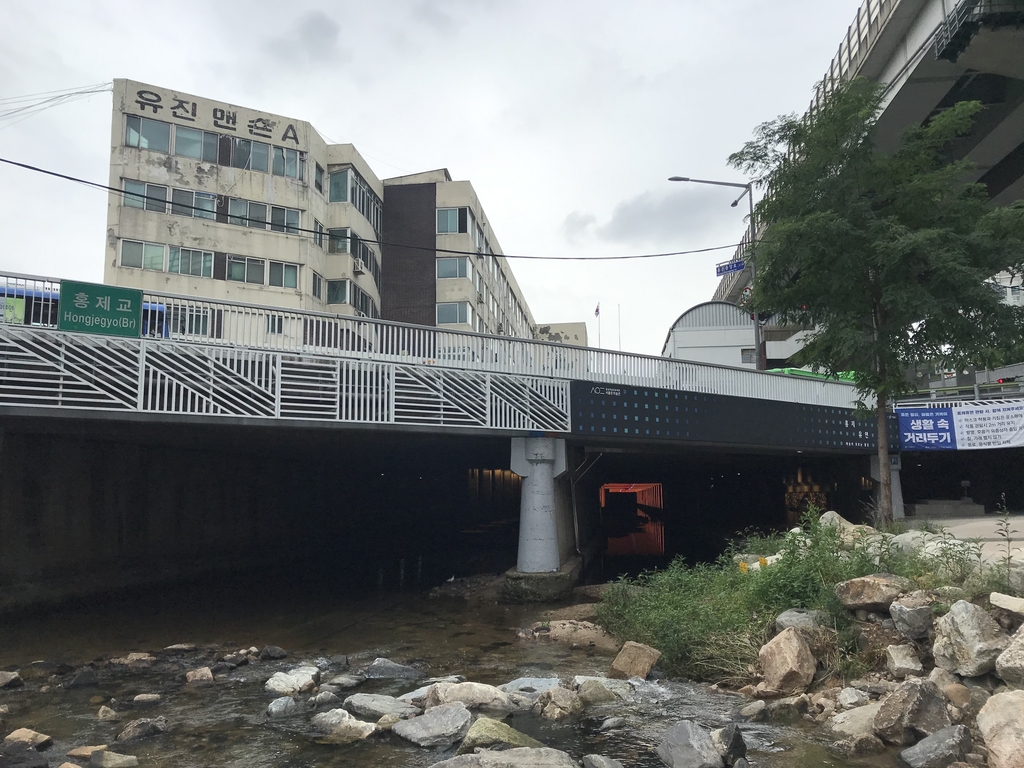 But old glories fade and times have changed.

Rapid urbanization has fostered much more fancy shopping centers, and high-rise condominiums that easily fetch a billion won have popped up across the capital.

The once-luxurious building, which has gone through substantial restructuring that brought down part of its wing to make space for an expressway, is now considered an archaic hurdle by some residents and property developers.

The half-century-old building, however, has emerged as an Instagrammable venue after the Seoul city government unveiled an exhibition themed around the Hongje Stream that flows through the basement of Yujin Sangga earlier this month.

"In 2019, the lower part of Yujin Sangga was opened, making a way that connected Hongje Stream, which was previously disconnected due to the building, and a unique underground space was disclosed that harmonizes the old concrete structures with nature," said an official at the city's design policy department.

"The intertwined history of the modern era has happened to create a unique landscape, displaying an open space that enables us to imagine various opportunities of change in the future," she said.

The show's title "Hongje Yuyeon" comes from a 250-meter stretch of the 11-kilometer-long Hongje Stream that runs beneath the building. "Yu" and "yeon" mean "to flow" and "to meet," respectively, while "yu" also refers to the first syllable of Yujin Sangga, according to organizers.

The public arts exhibition explores the natural and social history of Hongje Stream and reimagines it as a middle land between nature and artificiality and as an urban haven in the densely populated city of 10 million. 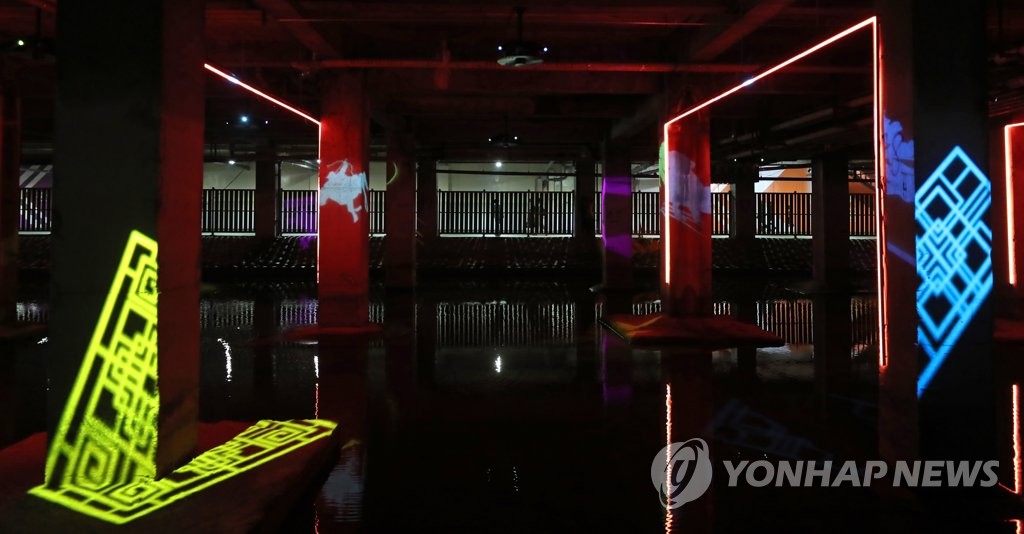 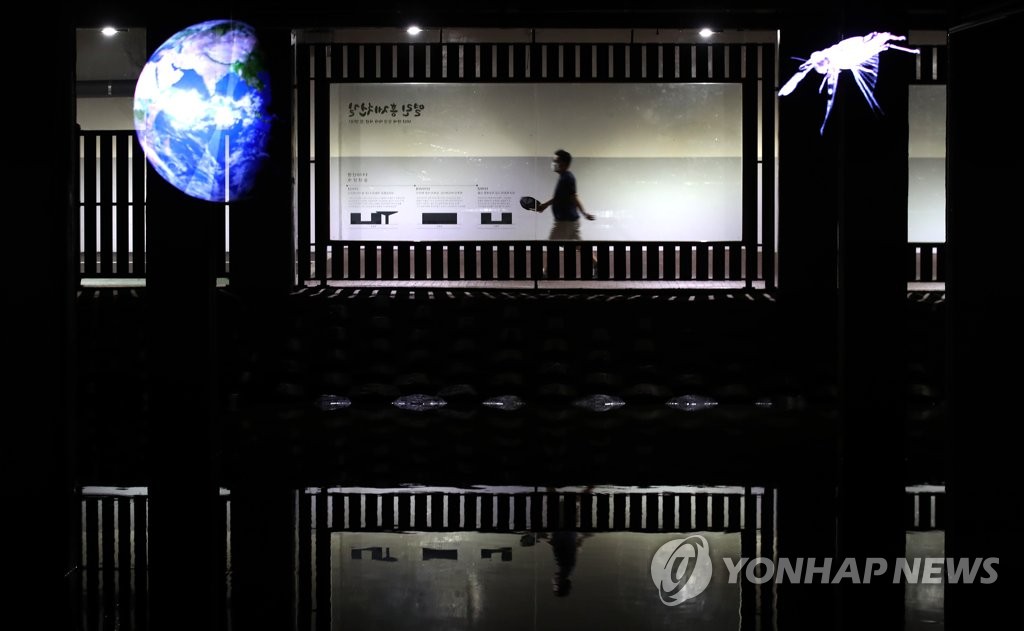 "Light that flows - the narratives of light" and "Hongje Yeonga, the mise en scene" cleverly make use of the exhibition venue by juxtaposing artificial light with the dark and still space to tell stories of the past and future.

While "Light that flows - the narratives of light" illuminates flickering images of historic figures and anonymous people of the past -- soldiers, assassins and gisaeng -- in what seems like a real-life kaleidoscope, "Hongje Yeonga, the mise en scene" shows futuristic 3D holograms of the solar system, rocks and animals like a crane and jellyfish. 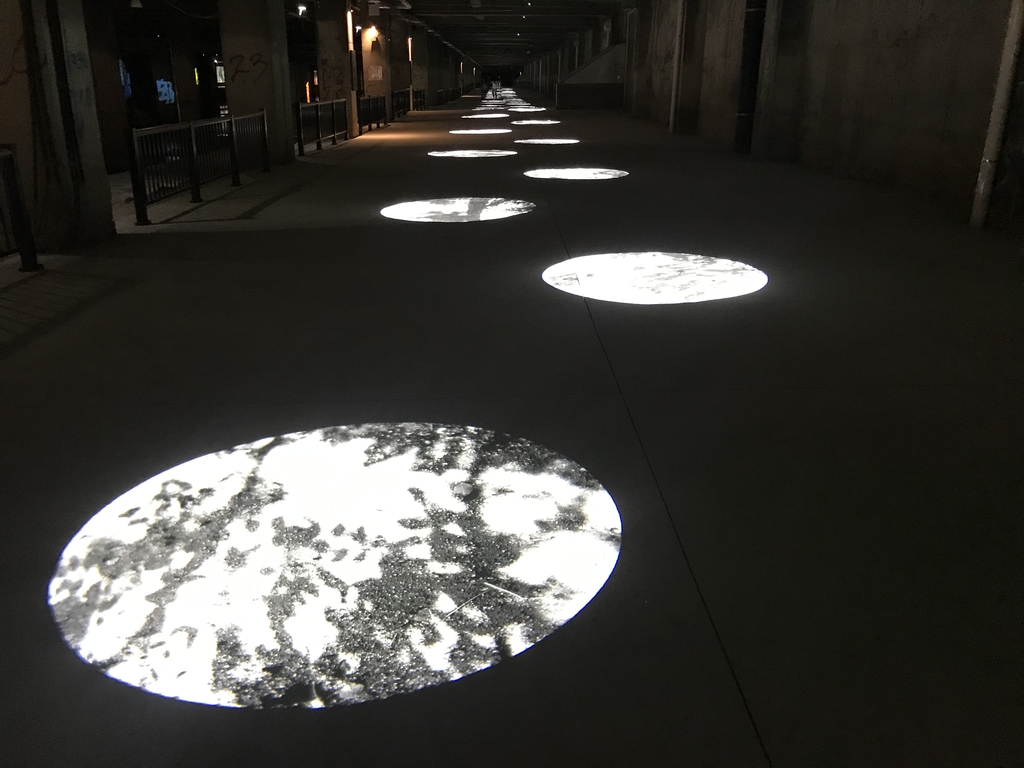 "The path of breaths" offers a surreal experience by creating an imaginary forest through light and shadow. Serene music echoes as visitors step on shimmering circles of trees, leaves and flowers that sway, reminding one of a tranquil forest walk on a clear and windy day.

The highlight of the exhibition is "Warmth," a series of rectangular LED frames that light up for 10 minutes. The colors alternate from white to warm hues of yellow and orange, reacting to a hand-shaped panel that visitors can put their hands on.

The installation creates a glowing tunnel of light, providing a sense of calmness to visitors standing on the stepping stones installed near the artwork. "Warmth," which aims to emotionally restore viewers, was inspired by the name "Hongje," which means "providing relief widely," as well as myths that the stream was one of the warmest, allowing people to gather for washing and socializing even during winter. For those interested in the building's history, a video near the entrance features interviews with old tenants, who call Yujin Sangga their "family" and reminisce about the days when customers flooded the building's shops and money easily flowed in, offering a glimpse of the its heyday. Walking through the various mom-and-pop stores nestled in between the concrete pillars on the ground floor and navigating the underground venue while spotting scribbles of words and numbers, probably written by builders decades ago, itself makes the visit memorable.

The exhibition runs from 10 a.m. to 10 p.m. daily, but admission to the stream and the underground venue may be restricted due to heavy rain.

The city government plans to run the public art exhibition for two years.