SEOUL, July 29 (Yonhap) -- The ruling Democratic Party (DP) passed a package of real estate-related bills through parliamentary standing committees this week, including two on Wednesday, in a process vehemently protested and boycotted by the main opposition party.

Earlier in the day, the standing Legislation and Judiciary Committee, where 11 out of the total 18 seats are held by the DP, approved two bills to revise the Housing Lease Protection Act in its plenary session.

This was after the DP fast-tracked the passage of another 11 real estate-related bills through three standing committees including the Strategy and Finance Committee, based on its lion's share of 176 seats in the 300-member parliament.

Those bills aim to raise tax burdens for owners of multiple houses and curb property market speculation in line with the government's broadening efforts to bring the overheated real estate market, especially apartments in Seoul and nearby cities, under control.

On July 10, the Moon Jae-in government said it will raise property ownership tax for multiple-home owners and ease regulations to supply more homes in the capital area, marking the latest action to cool a surge in prices that has fueled public discontent. The government also plans to announce a package of fresh measures to boost home supply on Aug. 4.

If the envisioned bills are approved at a full floor session, they will better protect the rights of tenants in the face of skyrocketing house prices.

They will also legally guarantee tenants' rights to extend their house lease contracts by up to two more years from the first two-year deals. Under the revisions, the maximum rate of rent increase is capped at 5 percent in the event of contract renewals.

Under the bills, the home acquisition tax levied on owners of two homes will also be increased to as high as 8 percent, while the rate for owners of three homes will be revised up to 12 percent.

Meanwhile, those who buy their first homes will get a 50 percent discount in acquisition tax under the bills, according to the content of the bills.

The passage of bills through the standing committees, however, was single handedly led by the DP, as lawmakers of the main opposition United Future Party (UFP) boycotted the committees' votes and brought the procedures into question.

As DP Rep. Yun Ho-jung, chairman of the legislation committee, put two bills to a vote Wednesday, all the committee members affiliated with the UFP walked out of the meeting room in a boycott of the vote.

Rep. Kim Do-eup of the UFP, who is a member of the committee, accused the chairman of leading the plenary committee meeting in a "unilateral manner" and trying to railroad the bills. 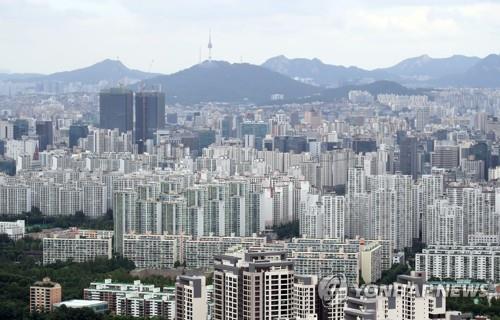 Protesting the series of actions by the DP as "parliamentary dictatorship," the UFP has also threatened to further boycott committee meetings and take legal action.

"(Discriminately) tabling bills proposed by certain lawmakers and railroading them for vote without proper discussion constitute an act of deluding the public and the National Assembly," Rep. Yoo Sung-kull said in a press conference Tuesday.

"Given the clear flaws, the bills should be invalid, and (the UFP) will take legal action," the lawmaker said.

Despite growing opposition protest, officials at the DP said the party is planning to pass all the bills through the final full-floor vote by Aug. 4 to back the government's efforts to stabilize the market. 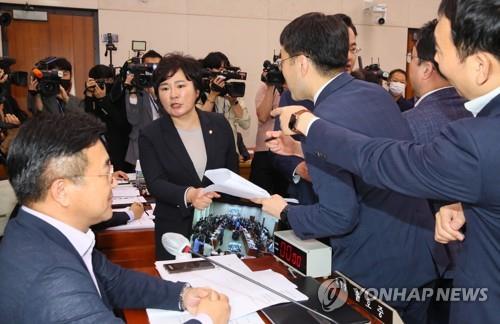