WASHINGTON, July 29 (Yonhap) -- The U.S. envoy for defense cost-sharing negotiations with South Korea has been appointed as a coordinator for the Arctic region, the U.S. State Department said Wednesday.

James DeHart will "lead and coordinate the department's policy-making and diplomatic engagement on Arctic-related issues to advance U.S. interests in the region related to safety and security," it said in a press release.

He will be serving as the principal adviser to Secretary of State Mike Pompeo and his deputy Stephen Biegun, according to the release.

He had led his team in the past seven rounds of talks with his South Korean counterparts on determining Seoul's payment for the stationing of the 28,500-strong U.S. Forces Korea (USFK) since September last year. The negotiations have stalled amid Washington's demand for a drastic increase of 50 percent in Seoul's share under the previous deal.

His successor has yet to be announced. 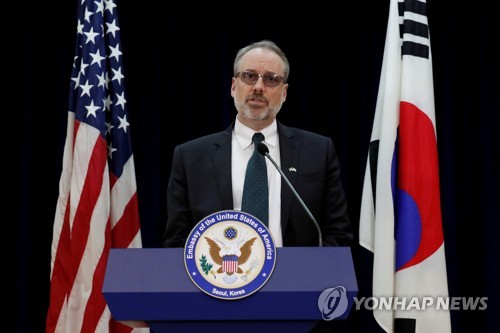