SEOUL, July 30 (Yonhap) -- Manufacturing jobs in South Korea decreased at the fastest rate in a decade last month as the coronavirus pandemic continued to weigh down the export-driven economy, government data showed Thursday.

According to the labor ministry's monthly report, the total number of workers on nonagricultural payrolls in June stood at 18.37 million, a decrease of 214,000, or 1.2 percent, from the same month last year.

The number contracted for the fourth consecutive month, though the pace slowed down from 2 percent in April and 1.7 percent in May, largely due to gains in public sector and health industry jobs.

Asia's fourth-largest economy slipped into a recession in the second quarter, shrinking by 3.3 percent from three months earlier, according to the Bank of Korea. 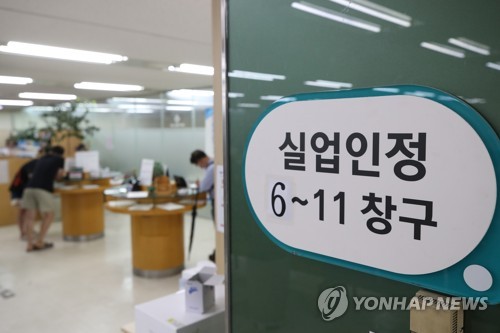 The labor ministry statistics showed factory employees totaled 3.65 million, shedding 77,000, or 2.1 percent, year-on-year. It is the biggest decline since the ministry began to compile the data in 2009.

The manufacturing sector began to lose jobs in February when COVID-19 began to spread in the country. The number of manufacturing employees shrank by 11,000 in March, 56,000 in April and 69,000 in May.

The services sector bore the brunt of the coronavirus-induced slump. Payrolls lost 133,000 jobs in the lodging and food service industry, 60,000 in the travel and business support service industry and 57,000 in the wholesale and retail industry.

The overall decline was tempered by the government and public sector, which gained 49,000 jobs. Health and social welfare sectors also added 94,000 jobs and professional, science and technology workers increased by 32,000.

New hiring rose by 23,000 in the first increase since March.

Meanwhile, the average wage per worker in May was 3.29 million won (US$2,760). The figure rose 1.2 percent from a year earlier, largely because an increasing number of low-paid temporary workers exited the labor market.

The average number of working hours fell 10.4 percent to 150.2 hours in the month, due to fewer business days, more employees on leave and widespread business closures.
(END)