SEOUL, July 30 (Yonhap) -- HDC Hyundai Development Co., a major property developer, on Thursday called on creditors of Asiana Airlines Inc. to join another round of due diligence on the debt-laden carrier as it wants to proceed with its plan to take over the carrier.

On Sunday, HDC demanded an additional due diligence on Asiana Airlines for 12 weeks beginning in mid-August amid the new coronavirus outbreak's growing impact on the airline's financial status.

Kumho Industrial Co., which signed a deal with the HDC-led consortium in December to sell its entire 30.77 percent stake in Asiana, has demanded that HDC complete the deal by mid-August.

One month ago, the property developer called for renegotiations with Asiana's creditors over the acquisition terms, describing the ongoing virus crisis as a "never expected and very negative factor" that will affect the takeover plan. 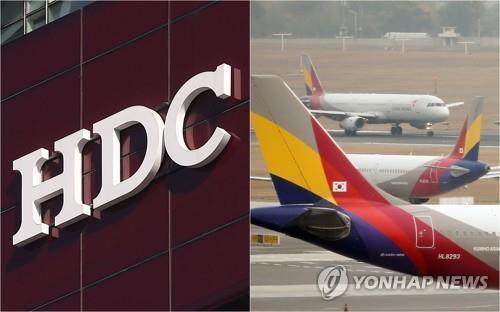 "If the airline's creditors supervise or participate in the (additional) due diligence on Asiana, it will ensure that the financial review will be conducted in a transparent and effective manner," HDC said in a statement.

The state-run Korea Development Bank (KDB), Asiana's main creditor bank, said it is looking into the HDC's request to see if it can be acceptable or not in the process of an M&A deal.

The KDB plans to announce its stance about the stalled Asiana deal next week, KDB Chairman Lee Dong-gull told reporters at a startup event held Thursday.

HDC claimed it will be forced to shoulder Asiana's heavy debts if it acquires the airline without looking into its current financial condition hit hard by the pandemic.

Also on Thursday, Kumho Industrial expressed regrets about HDC's request, saying it has provided all required documents and financial information to the construction company since December.

Kumho Industrial said it is hard to accept the three-month-long due diligence on Asiana, but it is open to consultations with HDC to get the airline back on track after the acquisition.

"We will cooperate with HDC if the additional due diligence is aimed at analyzing the current business environments (for airlines) and preemptively preparing countermeasures to better manage Asiana after the acquisition," Kumho Industrial said in a statement.

In fact, HDC is widely expected to scrap the deal given differences over acquisition terms between HDC and Kumho, and worsening business environments amid the pandemic.

The latest tit-for-tat comes after Financial Services Commission Chairman Eun Sung-soo said Wednesday that Asiana and its creditors were looking at countermeasures to help the financially troubled Asiana if the HDC consortium did not have an intention to acquire the carrier.

(LEAD) HDC still committed to Asiana takeover, calls for another round of due diligence

(LEAD) HDC still committed to Asiana takeover, calls for another round of due diligence