The government announced measures to raise the property ownership tax for multiple-home owners on July 10, marking the latest action to cool a surge in prices.

The new legislation on housing leases will allow tenants to renew their housing lease contracts by up to two more years from the first two years guaranteed under the current law.

House owners can deny tenants their right to have contracts renewed only when the owners themselves or their close family members move in.

The bills' parliamentary passage was predominantly backed by the ruling Democratic Party (DP), which holds 176 of the 300 assembly seats.

Boycotting the parliamentary vote, however, the main opposition United Future Party (UFP) accused the ruling party of railroading the passage of the controversial bills.

Of 187 lawmakers present, an absolute majority of 185 voted for the former bill, and the latter bill received 186 votes of support.

The government is set to hold a meeting Friday morning, presided over by Prime Minister Chung Sye-kyun, to endorse the bills, which will take effect upon the president's final approval and a following listing on the government gazette.

They are part of the so-called three lease laws conceived by lawmakers to contain spiking rent prices amid the overheated real estate market.

One more bill under the envisioned acts, requiring home owners to report their lease contracts to the government, is expected to be put up for a vote in a plenary parliamentary session scheduled for next Tuesday. 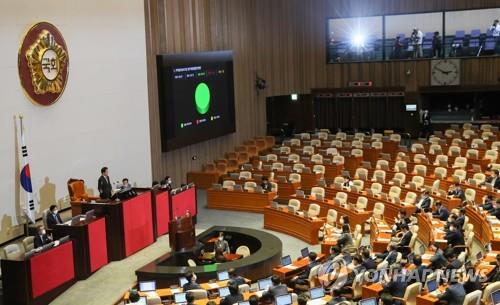