SEOUL, July 30 (Yonhap) -- South Korea and China will hold their annual vice-ministerial economic cooperation talks in the Chinese city of Qingdao later this week amid escalating tensions between the United States and China over security and trade.

Lee Seong-ho, deputy foreign minister for economic affairs, will lead the South Korean delegation to meet with the Chinese side led by Li Chenggang, assistant minister for commerce, during the 24th Joint Economic Committee session set for Saturday, Seoul's foreign ministry said in a release.

The talks come at a time when the friction between Washington and Beijing has escalated, with the U.S. calling for allies to join its China-bashing campaign. Seoul has been working to map out its position between the two superpowers to maintain good relationships with both.

"The two sides plan to evaluate global economic trends and the current status of bilateral economic cooperation and discuss the direction of bilateral trade and investment, as well as ways to strengthen cooperation on the regional and multilateral stages," the ministry said.

Saturday's meeting will mark the first in-person diplomatic meeting between Seoul and Beijing since the entry restrictions were imposed due to coronavirus concerns.

The two sides will also discuss expanding cooperation in anti-virus efforts in the post-pandemic era, including ways to further help businesses minimize the fallout from the COVID-19 outbreak, the ministry said. 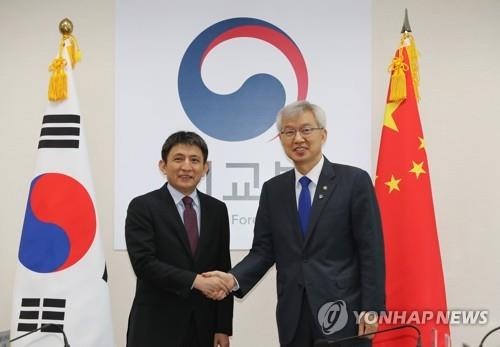