SEOUL, July 30 (Yonhap) -- South Korean shares closed at the highest point in six months Thursday on the back of foreign buying that centered on major tech firms and automakers. The Korean won fell against the U.S. dollar. 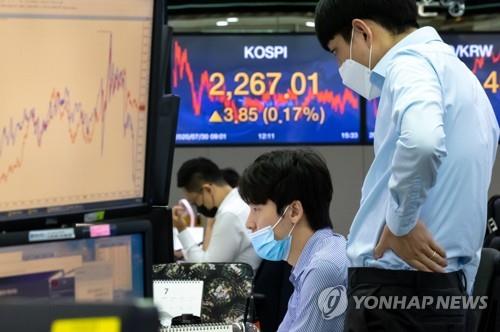 The hike was aided by a continued rise in top-cap Samsung Electronics, which delivered strong second-quarter earnings.

Other market heavyweights, such as automakers, also continued to build up gains.

The local currency closed at 1,194.40 won against the U.S. dollar, down 1.3 won from the previous session's close.

Bond prices, which move inversely to yields, closed higher. The yield on three-year Treasurys lost 1.2 basis points to 0.799 percent, and the return on the benchmark five-year government bond dropped 2.6 basis points to 1.037 percent.