SEOUL, July 31 (Yonhap) -- The number of damaged banknotes found in South Korea grew slightly from a year earlier in the first six months of the year, with some people trying to sanitize their money, apparently using the wrong methods, amid fears of the new coronavirus, central bank data showed Friday.

In the January-June period, the number of damaged bills came to some 345.7 million, up from 345.2 million found over the same period last year, according to the Bank of Korea (BOK).

The combined face value of the damaged bills came to about 2.69 trillion won (US$2.26 billion).

The BOK said the slight increase may be partly attributed to fears over the new coronavirus.

For instance, a person in Ansan, located just south of Seoul, sought to rid his money of the new coronavirus by literally washing them, damaging all 22 million won worth of bills he had received in wedding gifts.

A person in the western port city of Incheon also lost 5 million won worth of bills after trying to disinfect the bills by putting them in a microwave.

The BOK earlier said it will store used bills up to 2 weeks before re-releasing them to the market as a precaution but that people trying to personally sanitize banknotes may end up with damaged bills, some of which may not be replaced.

Banknotes with more than three-thirds of their surface undamaged are fully reimbursed, but those with less intact surface may be replaced by only half of their face value, or not replaced at all.

In the first half, the number of damaged banknotes replaced by the BOK came to only about 23.6 million, less than 10 percent of the 345.7 million damaged bills found over the cited period, according to the BOK. 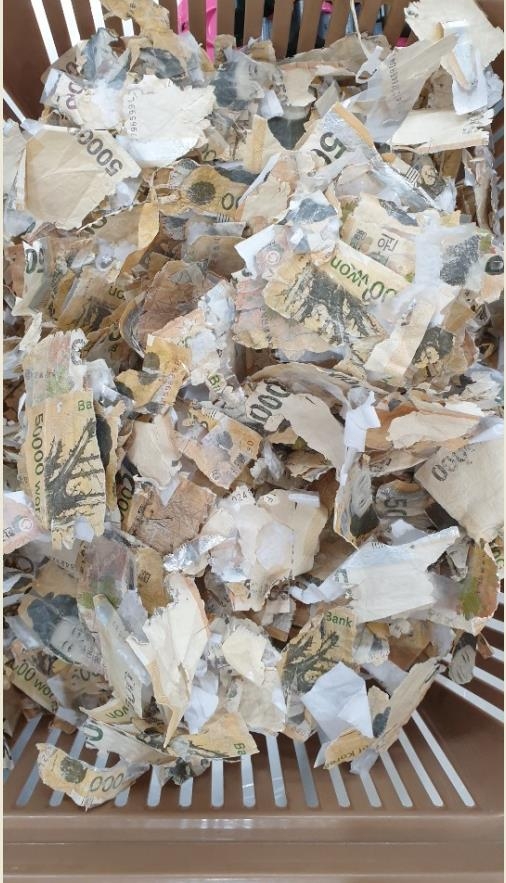 No. of damaged banknotes grows amid coronavirus scare

No. of damaged banknotes grows amid coronavirus scare