Local carmakers shipped passenger cars with a combined value of US$6.2 billion during the April-June period, according to the data compiled by the Korea Customs Service (KCS).

In the second quarter, South Korea's imports of passenger cars jumped 17.7 percent on-year to $2.9 billion, according to the data.

Exports of passenger cars to the United States fell 14.4 percent in the second quarter, while those to Canada declined 25.4 percent.

The customs data also showed that exports of eco-friendly cars reached $3.1 billion in the second quarter, up 22.3 percent on-year.

The average export price of cars reached $17,750 in the April-June period, the data showed

South Korea's auto output sank nearly 20 percent to an 11-year low in the first half of the year due to the coronavirus outbreak.

Industry leader Hyundai Motor Co. and four other automakers produced 1.63 million vehicles in the January-June period, down 19.8 percent from a year earlier, according to the data from the Korea Automobile Manufacturers Association (KAMA).

It was the lowest figure since the 1.53 million units produced in the first half of 2009. 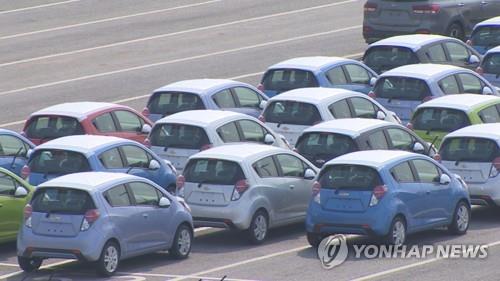 Exports of passenger cars dip 41 pct in Q2 amid pandemic

Exports of passenger cars dip 41 pct in Q2 amid pandemic