SEOUL, July 31 (Yonhap) -- From its inception, SSAK3, a one-off K-pop team created for MBC TV's weekend variety show "Hang Out With Yoo," was intended to be a silly tongue-in-cheek project, riding on the coattails of the retro boom in today's pop culture landscape.

At best, the co-ed trio, formed of two late '90s-2000s singers -- Lee Hyo-ri of girl group FIN.K.L and male soloist Rain -- and top-billed comedian-emcee Yoo Jae-suk, was expected to offer a dose of wholesome feel-good '90s nostalgia to viewers and, in doing so, a much needed boost in ratings for the TV network currently undergoing a serious financial crunch.

What SSAK3 (word play on "ssaksseuri," a Korean slang term for "clean sweep") actually ended up delivering is no laughing matter. The project group has exploded into one of this summer's biggest K-pop acts to date.

Since July 11, the team -- modeled after the likes of late-90's-2000s co-ed trio Koyote -- has already released three single albums and plans to drop a special album, a compilation of the three singles and solo tracks from each members, on Saturday.

The vibrant and carefree summer dance numbers -- "In Summer," a remake of the iconic 1994 dance hit by Deux, "Beach Again" and "Play That Summer" -- have floated on the top tiers of most domestic music streaming services since their successive weekly releases on July 11. 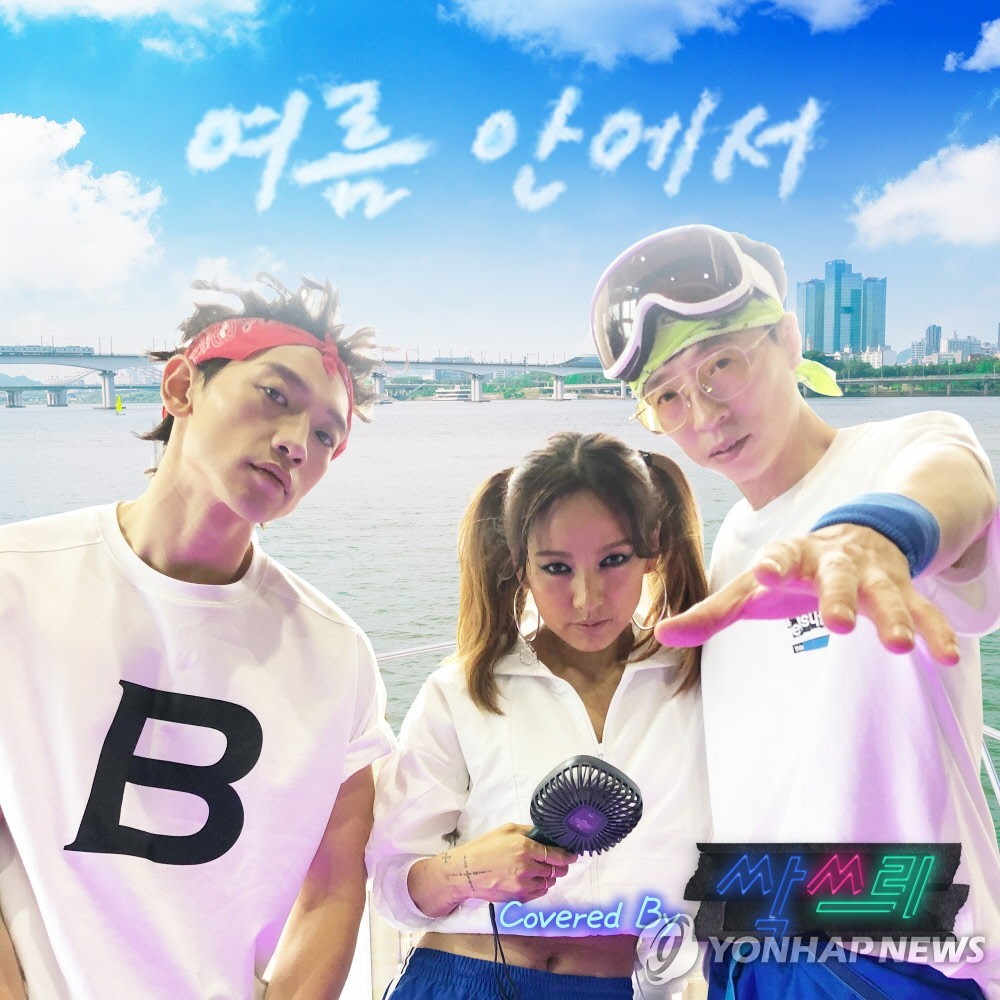 "Beach Again" was the top streamed song on Melon as of 9 a.m. Friday, outpacing "Maria" by Hwasa of Mamamoo and "How You Like That" by BLACKPINK. "Play That Summer" and "In Summer" pulled in at fourth and sixth, respectively. SSAK3's standing on other platforms, such as Bugs Music and Genie Music, isn't that different.

The group has also made noticeable splashes overseas, having stayed on four music charts -- iTunes, Apple Music, Shazam and Deezer -- for an average 3.86 days in 45 countries and regions.

"The song has a retro and summer vibe that is also easy to listen to," wrote Twitter user @khunyoolover, a self-professed fan of SSAK3 in Chiang Mai, Thailand.

The buzz surrounding SSAK3 isn't limited to just the music. The music video for "Beach Again" has so far racked up 4.5 million views on YouTube in less than a week, while the band is currently staging a full-fledged media blitz, blowing away the competition on television music shows -- finishing second on MBC TV's "Music Core" on July 25 and clinching first place on Mnet's "M Countdown," a much-coveted spot usually reserved for top-billed K-pop stars, on Thursday.

"Hang Out With Yoo" has also gained noticeable traction in ratings and online buzz in line with the trio's growing popularity. The weekend prime time show centers around Yoo, one of the biggest celebrity comedians in South Korea, tackling various vocational projects, such as cooking and stage acting, in a reality TV format.

SSAK3, from its inception to debut, has been chronicled in detail on the weekly TV series, including the trio coming up with the band's somewhat silly name and discussing the musical and visual concepts the members wanted to pursue and even jokingly choosing alter ego names: Yooduragon (Yoo Jae-suk), B-Dragon (Rain) and Linda G (Lee Hyo-ri).

The band and the TV show owns part of their success to a viral phenomenon since late May surrounding an old music video by Rain, whose real name is Jung Ji-hoon.

The video for Rain's 2017 song "Gang" on YouTube was caught up in a strange hate-watching boom online, leading to the "one Gang a day" movement, referring to the trend of watching the video at least once a day, which also lead to scores of parody videos uploaded on the internet.

But the element of nostalgia, of straight-forward and upbeat '90s sound laced with bright brass arrangements, and lyrics that are both unapologetically escapist and sentimental, is also an undeniable factor in SSAK3's success.

The group has apparently struck a nerve with older fans of music in their 30s and 40s in particular, fatigued by some of the more serious, concept or theme-oriented releases by today's mainstream artists.

"We may be a refreshing team, considering that we evoke old memories from fans similar to our age, while at the same time being a bit different from today's music for younger fans," Yoo said in an online fan meet-and-greet event on July 25. 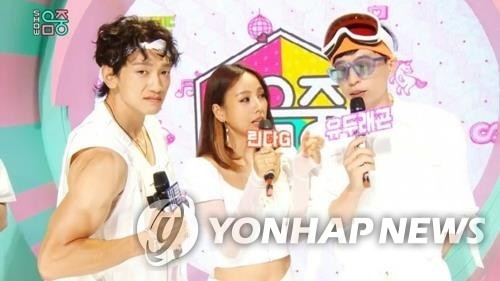 Paul Matthews, a British radio personality who has lived in South Korea for 20 years, agreed.

"Being in my early 40s, it's a nice nostalgic trip back to earlier days. There's something comforting about seeing older K-pop stars being a little silly and having fun," Matthews added.

Ha Jae-keun, a Seoul-based cultural commentator, said SSAK3 can be distinguished from contemporary stars from their very existence evoking memories of the good old days regardless of the listeners' age.

"The mass tends to enjoy songs that are both exciting and a bit sentimental. (SSAK3) tends to have both of those emotions in their songs, while the lyrics are also easy to understand," Ha said.

Some observers, however, have expressed reservations on whether the group truly deserves all of the praise it's been receiving, pointing out the fact that the band has the full-blessing and backing from a national television network for its promotion.

"I do think the popularity of the band stems purely from the power of television, as opposed to that of music," said pop music critic Chung Min-jae.

Chung saw the boom behind SSAK3 as a part of the larger recent trend of new music finding a footing among the mass audience through exposure in non-music mediums, such as advertisements, films and variety TV shows.

Others question whether it's appropriate for MBC to book the team on its own music competition program, where as record labels and trainees-artists of all sizes need to spend small fortunes and toil away for years for even the slightest chance to appear on national television.

To be clear, MBC has stated that all proceeds from SSAK3's album sales and publicity will be donated to charities.

"As a fan of the TV show, listening to the music and seeing the team enjoy success is fun," one entertainment industry official said, asking to be unnamed. "But in this day and age when high standards of fairness are demanded from public institutions, one has to ask whether the broadcaster is depriving other star hopefuls of opportunities." 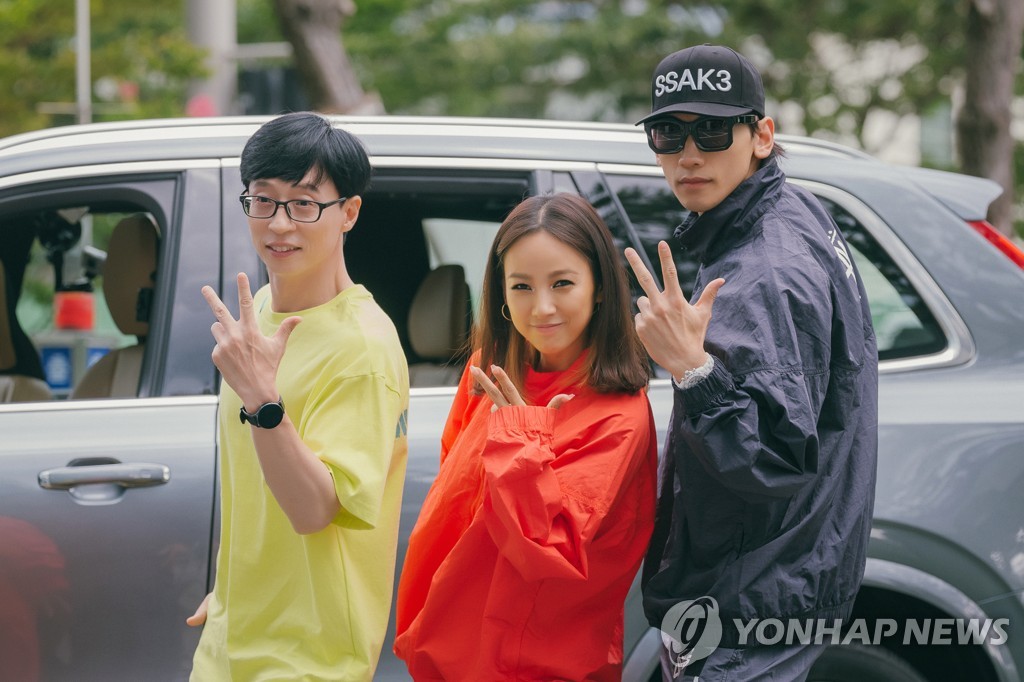