As the seasonal rain front was advancing north, Daejeon, 150 kilometers south of Seoul, and surrounding areas in central South Korea were battered by over 200 millimeters of rain this week, suffering casualties and extensive property and facility damage. 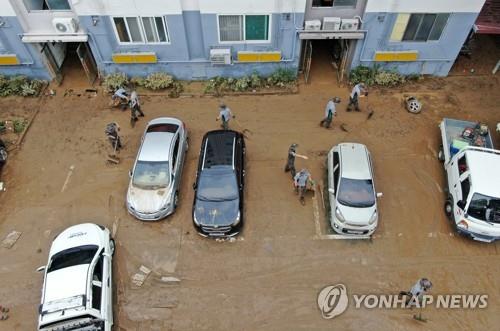 In Daejeon, hit by the heaviest downpours in 20 years, two people were killed, 56 residents in 28 households were rendered homeless and 449 cases of flood damage, including 103 inundated homes, were reported.

In sharp contrast, however, residents on Jeju Island and in the nation's southern regions that include Busan and Gwangju were groaning under scorching heat, as the rain spell has retreated from those areas.

The tropical night phenomenon, defined by the nighttime low staying above 25 C, has occurred on Jeju Island for the fifth consecutive day, while a heat wave advisory was issued for Busan and nearby Ulsan as of 11 a.m. Friday, according to the Korea Meteorological Administration (KMA).

The agency said the daytime highs will remain in the range of 30 C to 33 C in the southern regions and on Jeju for the time being.

But in Daejeon and surrounding South Chungcheong Province, located virtually halfway between Seoul and Busan, a heavy rain advisory was again issued as of 11 a.m., as the KMA forecast up to 150 mm of additional rain for the central regions on the day.

North Jeolla Province, located between Daejeon to the north and Gwangju to the south, was also drenched by heavy rain on the day, with daily precipitation reaching 49.4 mm in Jeongeup and 34.5 mm in Jeonju, the KMA added.

The KMA forecast cloudy and rainy weather for the entire nation on Saturday. Rain will start falling in Seoul and surrounding Gyeonggi Province at dawn before spreading to the central regions, North Jeolla Province and North Gyeongsang Province later in the day, the agency said.